Repost: Samsara (August 29th and 30th at the Cleveland Cinematheque) 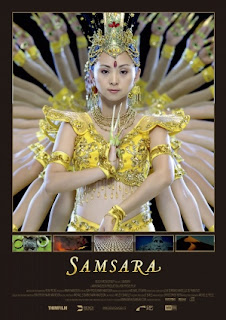 Yes, the held-over-from-2012 G.I. JOE sequel may be drawing all the mouth-breather audiences this week, but for cineastes with loftier concerns than whether Sgt. Slaughter will show up, there are the movies of director-cinematographer Ron Fricke and producer Mark Magidson. Alumni of the team who made the original art-house sensation KOYAANISQATSI under director Godfrey Reggio, they specialize in similar head-tripping, non-narrative visionary features that are more like guided meditations for the eye.

Their BARAKA (1992) was a keeper, a transcendental tour of forms of religious worship internationally. Ultimately, it seems, all the movies in this genre default to the mystical, along with a practically grandfathered-in KOYAANISQATSI theme of ultra-synthetic, modern, high-speed, high-tech life being madness compared to the vanishing village ways and tranquil traditions of old. Their 2011 companion piece (it shares a website URL with BARAKA), SAMSARA - a Sanskrit word translating as "wheel of life," or so I'm informed - falls in line with that. And, yes, it is perhaps a fair, if ultimately small-minded criticism to say that without that same awful high-tech society, the ability to make films such as this, let alone their websites, wouldn't exist.

Shot around the world in Panavision Super 70mm format (take that, digital-video), it is a flow of images and sequences that include Balinese dancers and their hypnotic chimes; the absurd indoor ski chalets of desert Dubai, the placid Iron-age bodies of human-sacrifices found in northern European peat bogs; deserted cities after natural natural disasters (flood/tsunami/hurricane, by the looks of it); high-tech assembly and disassembly lines, including non-explicit but still depressing animal "processing"; Muslim massing in Mecca; Christian baptisms of pilgrims of all ages; and achingly beautiful sunrises, sunsets and starfields in time-lapse.

[A bookend has a group of Tibetan Buddhist monks creating one of their intricate, vibrantly colored "sand painting" mandalas destined not to last. I don't want to make nasty insinuations, but not so long ago some guest Tibetan monks created one of those things in Cleveland. Not long afterwards...LeBron left. Bible-thumpers might declare that's what you get, stirring the Apocalyptic Wrath of the Almighty by bowing to the heathen. Hey, I'm only sayin'.]

Some of the ironic juxtapositions are more accessible than others. Standouts include a breathtaking cut from young African mother to a tribally tattooed dad cradling his youngster in an urban cityscape. The obese and the aged prepping for plastic surgery segue to spooky warehouses of nude department-store mannequins, to gyrating young Asian bar girls in bikinis - and then to dolls and a Japanese geisha in full makeup who only gives away that she's for real when she sheds a tear.

A sequence of gun ownership, weapons manufacturing and firearms fetishism in the Third World and the "developed one" is also something you wish would be seen by the level of viewers whose prime concern right now is how the Joes will beat Cobra this time.  Fricke/Magidson are no fools, and they don't expect you to be either. I would guess only lifelong National Geographic magazine hoarders would "get" the majority of this movie's jaw-dropping sights (like robotics engineer Hiroshi Ishigura and his artificial double) without explanatory liner notes - but that's like saying you can't jam to Pink Floyd's The Wall or the Who's Tommy concept albums if you don't grokk every single note or lyric.

Go see SAMSARA (with, incidentally, music by Lisa Gerrard of Dead Can Dance and Marcello de Francisci), even if you have to take a eco-incorrect automobile or check showtimes on the toxin-producing  PC device to do it. (4 out of 4 stars)