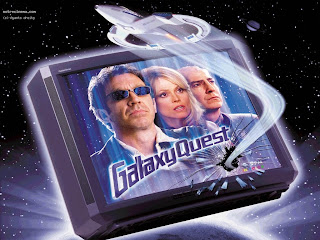 There's a stellar idea at the heart of this okay f/x-laden 1999 DreamWorks comedy-fantasy, back from the early years of the Spielberg-founded super-studio. For me GALAXY QUEST was a near-miss, what should have been a comedy gem riffing on "Star Trek" fanaticism comes off instead a bit like cubic zirconium instead. Still glitters from time to time.

The premise is that a quick-cancelled, Roddenberry-esque TV space series called "Galaxy Quest" is cherished by a cult of admirers, obsessive nerds and teenagers. Principle cast members of "Galaxy Quest," unable to get work since (oh, movie is set in Cleveland? I didn't notice first time out) trek morosely to weekend Holiday Inn conventions and ribbon-cuttings at new superstores, wearing their old "Galaxy Quest" uniforms and makeup. Chief among the "Galaxy Quest" ensemble is vain actor Jason Nesmith (Tim Allen), who, as intrepid Capt. Peter Quincy McTaggart of the starship Protector, is still resented by his castmates for his stepping all over their lines and always managing to get his shirt torn off in fights with villains.

At a low point in relations with the other actors, Nesmith and the troupe are paid to reprise their roles for a bunch of jump-suited weirdoes about a full-scale replica of the Protector's bridge, for what a semi-drunken Nesmith believes is just an elaborate fan-fiction performance. But, in a neat twist on a cliché Gene Roddenberry used again and again so that the Starfleet crew could find themselves in the old west, 1920s Chicago or ancient Rome, it turns out that the clients are actually Thermians, an advanced alien race. Unaware of the concept of theatrics or artifice, the Thermians, mistaking "Galaxy Quest" reruns for "historical documents," have built an entire culture and technology in worshipful imitation of the mock-Shatner and Enterprise. The ship on which the actors thought they were doing schtick is, actually, the real thing, and an oblivious Nesmith, in character as the macho McTaggart, accidentally declared a real deep-space war on the Thermians' mortal enemy, a reptilian conqueror whose cool-grotesque look was obviously inspired by lionfish - and whose name was borrowed from fearsome New York Times film critic Andrew Sarris.

Now how can you go wrong with a premise like that? Complete with supporting human character who, once the earthlings realize their peril, fears that he's one of those nameless "guys" in the red shirts, who invariably get killed after beaming down on some planet. That's funny...Yet still, some of the humor seems to fall victim to flat delivery or gag mistiming. Somehow the thing never quite gels. It may be relevant to mention that original director Harold Ramis, of GHOSTBUSTERS and other proven hits, left this production during the development stage, handing the reins over to Dean Parisot. Ramis instead did a forgettable remake of the Peter Cook-Dudley Moore classic BEDAZZLED, which shows that even a pro like Ramis can't always work wonders. Still, I wonder how GALAXY QUEST might have gained additional comedy warp speed if Ramis had held the helm all the way through.

Parisot's movie still flashes with occasional photon-torpedoes of brilliance, goofing, SCREAM-like on the familiar genre tropes, like the hoky contrivance of the Protector's unnecessary duct-laden schematics (tunnels that exist only for the characters to escape through) and overdramatic self-destruct mode. Sigourney Weaver, attired in a blonde wig and cleavage, plays the disgruntled female lead of "Galaxy Quest," a prime-time sex symbol who bemoans that her lone crew function in the show was to repeat exactly what a talking ship's computer just said. Part of the gag is the eminent actress Weaver cast against type, but one kind of wishes DreamWorks had possessed the Tarantino-like sense to toss the part of an actual jigglevision actress of yesteryear - Cheryl Ladd, Suzanne Somers, Lorna Patterson, Morgan Fairchild, or a Landers sister or two. Alan Rickman is the Spock equivalent, one Alexander Dane, a classically trained actor (dig the Patrick Stewart-Leonard Nimoy amalgam) stuck wearing a Klingon-like headpiece as the usual noble alien sidekick. Dane never takes off the lumpy forehead appliance, not even in private, which may be a joke or just something the filmmakers hoped nobody would notice, hard to tell.

As for Tim Allen, the voice of Buzz Lightyear plays it surprisingly low-key. Either the actor's heart wasn't in this, or he felt that a stolid, pompous hero-guy was the best approach - or he cannily figured out, as we've all learned, that nobody can spoof William Shatner like William Shatner; check him out in the 1999 comedy FREE ENTERPRISE.

Even though GALAXY QUEST isn't quite the masterwork I was hoping it would be, it carries some fond memories for me and earns additional good will for not, as of this writing, generating a sequel, not even direct-to-video. Lesser high-concept flicks have done just that, To Infinity and Beyond. Hey, did anyone but me notice that Cleveland Magazine changed their cover typeface to the same font used in the 1960s classic Star Trek? Did some deluded graphic designers actually think that would make this town seem more fun to live in? Lieutenant Ignizio, set phasers on "ridicule." (3 out of 4 stars)
Posted by Bob Ignizio at 12:00 AM