Reality TV gets reminded of its roots in the new TV comedy Public Access! Screens August 29th at the Indie Gathering 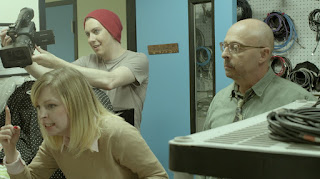 Writer/Director Kevin Hanna announces the Midwest Premiere of the new TV comedy pilot Public Access on Saturday August 29th at 6:25PM at the Clarion Inn & Conference Center, Screening Room C, as an Official Selection and 2nd Place Comedy TV Pilot Award Winner of the 20th Annual Indie Gathering International Film Festival.    Do you love 30 Rock or Parks and Recreation?  Are you a fan of WKRP in Cincinnati or The Office?  Public Access is your not-so-guilty pleasure to fill the absence.  Nothing on TV now quite compares to the level of crazy for the employees and volunteers at WNG, public access station.  The show goes back to a place where reality TV is actually real.  Writer/director Kevin Hanna grew up watching public television and wrote a series that reminds people of the cheap and weird TV he grew up watching, and tells them it’s still here… and still cheap and weird!

Going for real authenticity, Public Access was filmed at ECTV, a public access station serving the small Chicago suburban community of Evanston, IL.  This level of verite surely contributed to an Award of Merit from the IndieFEST Film Awards as well as 2nd Place in the upcoming festival in Hudson, as well as SIX nominations, including Best Comedy Short Film and Best Short Film Director, at its World Premiere at the St. Tropez International Film Festival in France this past May.
Posted by Bob Ignizio at 12:00 AM