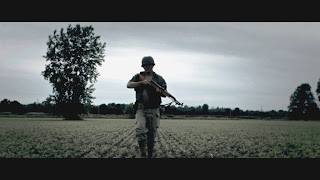 The web series “Ranger” offers five short vignettes, each concerning American servicemen in the European theater during World War II. Given that the series was shot in Ottowa County, Ohio on a micro budget, one can’t help but be impressed at how well writer/director Justin Buckner manages to sell his period setting. It also helps that the cast is unusually strong for a production of this level. I don’t know if this is the usual micro budget film deal where the cast is all drawn from the filmmaker’s circle of friends, but if it is, Buckner has some talented friends. As a proof of concept or demo reel, “Ranger” is an unqualified success.

Each vignette, while taking place in the same milieu, is a standalone piece. The formula is a few minutes of characters talking in by-the-numbers war movie clichés leading up to a dramatic moment that remains unresolved. Cut to end credits. Watching all five installments, short as they are, is an exercise in frustration. As mentioned, it’s impressive what Buckner manages to pull off; I’m just not sure why anyone other than another microbudget filmmaker looking for inspiration would watch it. 2 out of 4 stars.

You can see all five episodes of “Ranger” for free on youtube. Click here to watch.
Posted by Bob Ignizio at 12:00 AM