Ornette: Made in America (August 15th and 18th at the Cleveland Cinematheque)

[ ORNETTE: MADE IN AMERICA screens Saturday August 15th at 9:15 pm and Tuesday August 18th at 8:30 pm at the Cleveland Cinematheque) 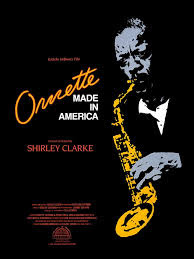 I just figured out how Bill Cosby could engineer a career comeback. He could co-star in a bunch of Woody Allen movies. Maybe Roman Polanski could be the guest director. Thank you, you've been a great audience. Drive safely. Good night.

Oh, is there a movie review to do? Sorry, I've been so busy filling out job applications, I didn't notice. Just as I didn't notice this past June when "free jazz" composer and Afro-American arts icon Ornette Coleman died at 85 of a heart attack. I suppose since it wasn't a police shooting incident or anything sordid, it didn't make the headlines - except possibly in Fort Worth, Texas, where Coleman is a favorite local son.

The celebration of "Ornette Coleman Day," September 29, 1983 (I remember that day; I think I was filling out a job application. Nothing came of it) in Fort Worth kicks off ORNETTE: MADE IN AMERICA, the eccentric 1985 docu-meditation on Coleman that was also the final feature of maverick counter-culture filmmaker Shirley Clarke.


Now, I do not really grok "free jazz" - and I strongly suspect nobody else does either but are too afraid of looking dumb in front of their fellow pseudo-intellectuals, so they pretend to get it. But in any case, I'm pretty sure the talented Clarke was trying to capture something of a visual "free jazz" feel in the movie, with its weird, fractured timeline, fantasy sequences and then-cutting-edge visual f/x (I'm fairly sure some early CGI). Most of the credits and the interviewees are identified by a Fort Worth "ticker" illuminated side-scrolling sign, and Yoko Ono caterwauls on the soundtrack at one point, a certain cliché of the avant-gard. Coleman is often shot framed in a neon-lit emblem/mandala of a triangle within a circle within a square. Clarke also indulges one of her favorite tricks, the "flutter edit," whereupon she cuts between two images (usually Coleman and a friend) in shorter and shorter intervals, until the effect is stroboscopic.

It is perhaps informative that Shirley Clarke actually began a film about Ornette Coleman under the auspices of public TV in the early 1970s. But (as she later told the tale) the network of Sesame Street was rather dismayed by her boldly stylized work-in-progress and pulled the plug on it. Crushed, she put the material aside for about ten years, until the opening of a performing-arts center in Fort Worth (the Caravan of Dreams, which makes cameos here) got behind and revived production on ORNETTE: MADE IN AMERICA. Some - but not much - of Clarke's older footage was used, and if the work hiatus explains the fragmentary nature of the pic as a whole, well, okay. But it still tilts dangerously towards pretentious-student-film syndrome.

Anyway, Coleman's life story comes at us only in disconnected bits here and there, in between bursts of visual gimmickry (solarization, etc.). After the Fort Worth celebration we are given to understand he left that city as a youth and, inspired by the motivational speeches of Buckminster Fuller, played horn and composed in the jazz hotbeds of LA, New York and Morocco (hanging out with William S. Burroughs, for one).

Late in the movie we hear via Ornette's son, drummer Denardo Coleman, that when New York was at its seediest in the late 1970s/early 80s, his father purchased via public auction a disused school building on Manhattan's drug-ridden Lower East Side. He planned an (ultimtely doomed) venture to convert the space into something of an arts-culture center, only to be assaulted repeatedly by local thugs and junkies, suffering a concussion and a punctured lung. So much for the "arts" as a vehicle for positive social chance, you ask me.  For what it's worth, the Caravan of Dreams in Fort Worth had a somewhat longer existence but still closed down in 2001. Just a little PSA there for those in Cleveland (there are many) who are banking on arts institutions for this city's future.

Clarke coaxes out of a Coleman a creepy anecdote that the guy considered getting himself voluntarily castrated - so he would no longer obsess over whether women only liked him because of his musicianship chops. Coleman was talked out of it by his doctor, who persuaded him to settle for circumcision instead. Then, at the very end, at a big party for the Caravan of Dreams opening, yellow-rose-loads of Texas women swarm around Coleman, giving them their hotel-room numbers. Poor fellow. Perhaps I should give "free jazz" a second listen after all. Perhaps Ornette Coleman should have mentored Bill Cosby.

(And if you ever get your hands on the DVD of ORNETTE: MADE IN AMERICA, among the generous disc extras is a mid-1980s video interview with the late Shirley Clarke in which the discussion keeps on wandering away from filmmaking and back to her sex life, including how, not long before the Q&A, she finally, grudgingly, gave it up to a male friend who had been trying to get her into bed for ages. Doesn't really do much good for the heroic-feminist image of women in cinema, if you ask me (and nobody does). Just saying.)

It's a bit of a push of our emotional buttons when Clarke presents precious footage of "The Link," a historic jam-concert experiment between Ornette and Denardo Coleman in which both were in separate NYC neighborhoods, joined together in real time by a simulcast transmission video feed. Denardo is at the foot of...the looming World Trade Center No. 2.

But if there's one element that's really a kick in the cerebrum, it's at the very end - a childish folk-ish chant-song over the closing credits whose chorus actually goes "Catch that nigger!" over and over again, soon turning into an audio jumble of the dreaded N-word, overlaying a portrait of Ornette Coleman's smiling face. This to conclude a film that was otherwise fairly color-blind in its presentation. OMG! WTF! Ohellno! and similar expressions come to mind. What was Ms. Clarke thinking with that particular creative choice?

Posted by Charles Cassady Jr. at 9:16 AM