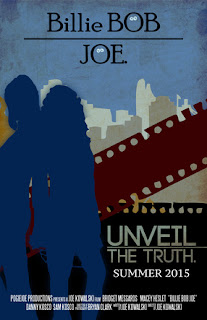 Don’t remember that? That’s because it’s a fictional conflict 20-year-old movie director Joe Kowalski (One Day: A Musical) invented for his new film Billie Bob Joe. Although the premise is undeniably silly, (Did you know the terms ‘sloppy Joe’ and ‘average Joe’ were invented by the Bobs to slander the Joes? Or that ‘bobbing for apples’ derives from when Joes used to drown Bobs underwater?) Kowalski says that the topic is actually utilized as a family-friendly satire of prejudice, intending to humorously show the ridiculousness of warring groups of people, not unlike the Dr. Seuss 1984 classic The Butter Battle Book.

But that’s not all, says Kowalski. “The true heart of the story revolves around two young stepsisters making a documentary about the Joes and the Bobs, and how they come to appreciate one another again.” Kowalski noted that many films do not always have strong female leads with three-dimensional personalities. “We have two!”

Starring local actresses Bridget Messaros and Macey Heslet with supporting actors Danny and Sam Kosco, the mockumentary film also features over seventy other local actors and actresses, along with some fairly well-known faces appearing in brief cameos, including former child actress Mara Wilson of 'Matilida' in her first film appearance in 15 years; James Marsters, who played ‘Spike’ on Buffy the Vampire Slayer; Buddy Valestro, the star of Cake Boss; and Cecil Baldwin, star of one of the most popular podcasts of all time, Welcome to Night Vale, among many others. The film is set very prominently all around Cleveland and is described by Kowalski as partially a love letter to the city.

The film premieres at the Cedar Lee Theater on August 16th at 7 pm. The event is family-friendly and pay-what-you-want. Half of the merchandise money will go to the charity Dress for Success, which helps low-wage women find and obtain job opportunities.

You can find out more about the film at http://www.pogiejoe.com/billie-bob-joe.html and can view the trailer at https://youtu.be/n6nHVdChcWg The film also has a Facebook page at www.facebook.com/bbjmovie