[LISTEN TO ME MARLON opens in Cleveland on Friday August 28th exclusively at the Cedar Lee Theatre.] 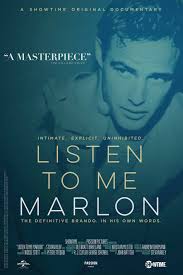 Hearing the premise of the new documentary LISTEN TO ME MARLON, thrilling though it was, still brought to my jaded mind the sideshow come-ons when someone announces they've got exclusive cine footage of a crashed-UFO retrieval at Roswell in 1947, or long-lost Bigfoot celluloid.

The pitch: it turns out that the legendary Marlon Brando, before his 2004 death, had squirreled away hundreds of hours of secret audio narration. Everything from psychotherapy sessions to phone-answering machine messages to what I might imagine were dry runs to the autobiography he published in 1994 (that critics found somewhat unilluminating, if my memory serves). There was even some attempt at DIY sleep-hypnosis - poignantly urging him to shed the obesity that had made him a distorted caricature of himself.

With access by Brando's estate to home movies and other creative visuals, filmmaker Stevan Riley puts the pieces all together for a narrative biography of the mercurial Brando in his own words. And, for a guy who went in the public mind from electrifying bad-boy actor to a bloated, cuecard-reading nutjob, Brando does a pretty good job explaining himself...

...Or does Riley and his team, sifting through 200 hours of material, put the more coherent pieces together for him? One does wish it was the former. But the question lingers.

Brando’s voice returns again and again to the theme of not feeling wanted or loved by his father, an alcoholic traveling salesman described as abusive (nonetheless, as we see here, at the height of Brando's 1950s fame, both went all-smiles on TV for Edward R. Murrow's Person to Person interview show). Brando's mother was also described as a hopeless drunk, but a nurturing and creative one. Young Marlon escaped his upbringing by going to New York and studying "Method" acting with Stella Adler, whom he revered evermore. His Broadway stage success in Tennessee Williams' A Streetcar Named Desire led to his brute-charisma in the big-screen adaptation that made the handsome youth an instant superstar.

He was also, he said in typical Brando speech cadences - part kitsch, part insightful - "destined to spread his seed far and wide," and there is a frankly embarrassing footage of the lusty young actor flirting with a TV interviewer. The man's fairly disastrous marital and personal history (there are flash-aheads to his late-in-life tragedy when a son committed murder and a daughter committed suicide) links Brando's childhood issues with his inadequate, soused parents. That struck me as a retro bit of the Freudianism so beloved (as was the Method) by '50s pretentious intellectuals.

In terms of what made Marlon tick as a performer, however, he is bell-clear; Brando was disdainful of how movies packaged the Hollywood superstars of cinema's Golden Age - so when fans bought admission to a Gary Cooper picture or a Cagney picture or a Gable picture, they could rely on the same persona and experience. Brando, in the tradition of his favorite boxer, didn't want the viewers to expect the same punches telegraphed every time. Thus he went from animalistic Stanley Kowalski to a stirring Marc Antony in the 1953 Joseph Mankiewicz version of JULIUS CAESAR, to a singing Nathan Detroit in 1955's GUYS AND DOLLS. Brando, in short, didn’t want to be a Brand.

But he felt a personal and professional undoing in 1962's box-office dud MUTINY ON THE BOUNTY, failing to click with aging director Lewis Milestone and generally feeling he'd failed artistically (while generating international headlines as an on-set troublemaker). Oddly, no mention that the previous year Brando himself had turned in his lone directorial effort with the western ONE-EYED JACKS - in which he took over from no less than Stanley Kubruck. While finishing a respectable-looking gunslinger drama in the end, the hapless actor-director still overspent and overshot to the point that Paramount could not recoup releasing the white elephant.

And Brando disdained his role as Tommy Malloy in the classic ON THE WATERFRONT, saying he hadn't felt he'd delivered the goods onscreen, no matter how much praise he'd won for the part. Oddly, another actor of the same time period - one who never caused so much on-set trouble as Brando - also said he felt insecure and regretful about some of his most acclaimed roles: Jack Lemmon.

Either way, in the 1960s Brando did a number of unfortunate or plain silly parts that indicated he'd quite lost his early fire - though with THE GODFATHER and LAST TANGO IN PARIS he regained critical goodwill and audience fascination. Still, by then Brando was, by his own admission, in it mainly for the money (exhibit A: SUPERMAN), with occasional fits of indulgent artistic temperament.

As for sending an American Indian maiden to turn down his Oscar for THE GODFATHER and similar stunts, Brando explains his fierce political awakening regarding the plight of blacks and aboriginal peoples, and it sounds a sincere bit of celebrity ego translating into activism that kind of makes sense in context. But again, I would have liked to eavesdrop on the editing sessions, to get a sense of the unfiltered legend. Perhaps the DVD extras will clear up that.

I remember well when Brando's final movie came out posthumously, the Frank Oz-directed caper drama THE SCORE. The Hollywood-douchebag-to-the-end gossip was that Brando, playing a supporting role as an aging crook brokering one last big deal, refused to take Muppeteer Oz seriously as a director and would only do his scenes if Oz left the set and shooting was more or less coordinated by lead Robert DeNiro. Whatever. In any case, even in a Ridge Park Square multiplex theater at a matinee, with just a smattering of middle-aged moviegoers, there was an audible gasp in the auditorium when Brando’s character makes his entrance. It’s him!

For those viewers still fascinated by this singular talent, LISTEN TO ME MARLON is a revelation. (3 1/2 out of 4 stars)

Posted by Charles Cassady Jr. at 9:07 AM