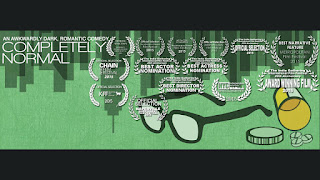 The film takes an inventive approach to portraying the alternate personalities of Gwen, with Geneva Carr, nominated for Best Actress at 2015 Tony Award for her performance in “Hand to God”, as Mary, Gwen’s confident, sexy alter ego; and pro wrestler / punk singer, Jym Parella, as Dylan, the dark and protective side of Gwen’s personality. Rounding out the cast are veteran actors Kate Hodge (Leatherface: Texas Chainsaw Massacre III) as Gwen’s therapist Dr. Hunter, and Mark Hamlet (Mona Lisa’s Smile, The Guru) as Greg’s well meaning but ill-advising father.

Completely Normal had an efficient shoot on a tight schedule, with production lasting three weeks in December of 2013, and was shot throughout the neighborhoods of Queens, New York. Vornkahl kept his onset crew small, including producers Andrew Beguin and Molly Beitchman, mixer Brian Yost, and cinematographer Brian Harnick, all of whom have previously worked together on the Food Network series Chopped. A 2006 graduate of Hofstra University’s film program, Vornkahl assembled a large chunk of his pre and post production teams with his fellow alumni, bringing together co-writers Heather Davis, Paul DeKams, and Chris Vespoli; editor Mike Api, producer John Rebecchi, composers David Beede and Andy McCarthy; and costume designer Danielle Lemay, who also appeared in a small role as Julie, a cat-loving receptionist at Greg’s office. Colorist Gene Curley (Garbage Dreams, Wildlife) of Nice Shoes worked with Vornkahl to finalize the stark look of the film, showcasing a depressing side of Queens that is only ever brightened by Greg’s breaks with reality.

Written and directed by Robert Vornkahl, Completely Normal is an awkwardly dark, romantic comedy set in Queens, New York. The film follows two very strange people. Greg (Seth Kirschner), a hopelessly awkward romantic who takes things a bit too far in his mind and in real life, he could be described by some (perhaps all) as a stalker. Gwen (Jenny Grace), is a young woman trying to survive in New York City as a cleaning woman. Her personality disorder leaves it hard to accomplish most things, or even consider a love life. Greg spots Gwen on the subway and is immediately smitten. Gwen doesn’t realize it yet, but she has a very secret admirer. http://completelynormalmovie.com
Posted by Bob Ignizio at 12:00 AM