[BEST OF ENEMIES opens in Cleveland on Friday August 14th exclusively at the Cedar Lee Theatre.] 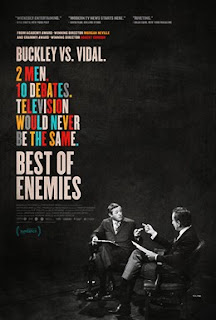 We take it for granted now, but in 1968 the idea of doing away with any pretense of journalistic impartiality and letting blatantly partisan pundits serve as commentators for major political events like the Republican and Democratic national conventions was unheard of. The two men chosen by ABC news, then a distant last place in the television news business, were William F. Buckley on the conservative/Republican side, and Gore Vidal on the liberal/Democratic side. There was no love lost between the two men.

The problem faced by BEST OF ENEMIES, Robert Gordon and Morgan Neville’s documentary about Vidal and Buckley’s contentious co-commentating gig, is making its subject relevant to modern viewers. Sure, some small number of political junkies would find the material inherently interesting. But it’s fair to ask: why should we care about a couple of guys, however witty they might be, arguing with each other over political topics from almost 50 years ago?

BEST OF ENEMIES answers that question quite well, showing how much of what Buckley and Vidal had to say forms the substance of conservative/liberal debate to this day. And perhaps more importantly, the film shows how the way the news covers that debate was changed by ABC’s “unconventional” convention coverage, allowing the news to become increasingly politicized to the point where, rather than aiming for impartiality, many news organizations blatantly target viewers of a certain political persuasion.

Despite making a case for its relevance, BEST OF ENEMIES does feel a bit lightweight. Still, it’s hard not to be entertained watching two smart guys who really don’t like each other doing their best to tear each other down verbally. And it’s interesting to see that neither man dumbs down his rhetoric in an effort to reach the lowest common denominator. They may be more concerned with scoring the best zinger than with making the most compelling argument for their side, but the level of discourse is far more intellectual than what it’s devolved to these days.

Well, for the most part, anyway. One of these men was bound to crack sooner or later, thus allowing the other to claim “victory” of a sort. Not a victory of any real substantive sort, but in public perception. Not much has changed in the world of political discourse since. 3 out of 4 stars.
Posted by Bob Ignizio at 12:00 AM