Tommy (July 18 at midnight at the Capitol Theater) 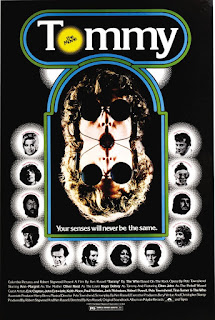 Hard to believe, given the hyped Broadway version, not to mention this 1975 movie, but the Who's Tommy first came into being as a 1969 "concept album" LP, on good old fashioned vinyl (I left some great vinyl out this week at the thrift store; some lucky shopper walked away with a shopping cartful of Captain Beefheart. I know it's off topic, but I had to say it (speaking of things I have to say, did anyone really believe that Ben Affleck-Jennifer Garner marriage was going to last? Movie people, generally speaking, are only capable of love with their own egos (I do believe that's why the film folk support same-sex marriage so fervently, so they can get married to themselves (and even then, there will be ruinous divorces - because they'll cheat anyway)))). Did I drift off-topic? Sorry. Let's rewind.


Hard to believe, given the hyped Broadway version, not to mention this 1975 movie, but the Who's Tommy first came into being as a 1969 "concept album" LP, on good old fashioned vinyl As far as a live performance, the famous "rock opera" was rendered live-in-concert by the band, in its entirety, on only two occasions. Much credit for Tommy's high profile has to go to maverick director Ken Russell, who anticipated MTV with his dazzlingly visionary, op-art influenced film version in 1975.


For me TOMMY, Russell's hypnotic flick, really captures a sort of zeitgeist of the Watergate era. Not the hippie-dippie 1960s, not the LucasFilm fantasy juvenilia of the end of the 1970s, but a strange never-before-never-again snapshot of a time when it seemed like cinema might just be an art form suitable for grownups after all, even when it goes all out for the rock-listening youth demographic.

Hard to believe Ken Russell died in 2011 as well; dude always seemed to be in the forefront of his own weird art-kitsch movement. I grew up reading critics who couldn't stand him (and for some reason his name become a punchline for a lot of Monty Python bits), but he sure was a fellow who didn't seen to do things by half-measures. TOMMY's allegorical plot, a comment on child abuse, misplaced hero-worhip and religion, is overlong and hard to digest without liner notes, but give it a go and behold a stream of imagery from the past whose time, paradoxically, has not yet come.

The all-sung storyline opens with the marriage of Nora (Ann-Margaret) and military aviator Capt. Walker (Robert Powell). Walker's plane is shot down during WWII, leaving Nora a pregnant widow and later a single mother, who marries seedy entrepreneur Frank (Oliver Reed). Tommy witnesses the horrifying scene when his father, badly burned but alive after all, returns home unannounced and surprises Frank and Nora in bed, only to be killed by Frank.

Ordered not to speak, hear or speak of the incident, Tommy lapses into a catatonic state - blind, deaf and dumb - that persists when he is an adult (Roger Daltrey). No matter what treatments Frank and Nora undertake to cure him - from hard drugs administered by "Acid Queen" Tina Turner, to Catholic-Christian-style healings under a Virgin Mary icon syncretized with Marilyn Monroe - nothing seems to get through to Tommy's inner world.

A sudden discovery that Tommy can play pinball like a champion, despite his handicap, makes him a celebrity and brings fabulous wealth to the household. When Tommy spontaneously regains all his senses (cue the song "I'm Free") his story becomes the foundation for a new religion - endorsed by Frank, naturally, as a profit-making enterprise. But Tommy's reign as a peace-love-and-pinball messiah is short and unsuccessful.

Russell's delirious style is not so much psychedelic as Warholean in its arty visuals, from the recurring optical refrain of silver balls and circular patterns to the electrified silk-screen-print colors (not to mention, of course, that Tommy becomes world-famous for about 15 minutes). TOMMY holds up very well in retrospect, perhaps because - apart from the WW2 stuff near the beginning - nothing pins it to a specific time period or era - well, except maybe for Jack Nicholson's singing (!) bit as one of Tommy's physician. The actor had just scored with CARNAL KNOWLEDGE (opposite Ann-Margaret) and ONE FLEW OVER THE CUCKOO'S NEST and was just about the biggest thing in Hollywood this side of Burt Reynolds.

Watch also for Eric Clapton as a shaman-figure, Elton John as Pinball Wizard, Keith Moon as Tommy's pedophile "Uncle Ernie," and  Ken Russell's own daughter Victoria, this last as Sally Simpson, an ill-fated worshipper of Tommy...You internet kids reading this, you have heard the names of Keith Moon and Eric Clapton before, right? (...sigh...). Ann-Margaret was Oscar-nominated for her strenuous, sensuous performance as Tommy's mother, but for me the show is stolen by bull-like Oliver Reed as Tommy's stepfather, a blend of paternal affection, menace, ruthlessness and opportunism, who seems to sum up composer Pete Townsend's worldview.

Hard to believe, but in doing some background for this review I found out that the original advertising catchphrase for the movie TOMMY was "He Will Tear Your Soul Apart..." ten years before a near-identical line for the come-on in the ads for Clive Barker's HELLRAISER. Just watch TOMMY, and remember that TOMMY came to theater screens in an era before computer graphics and Pro Tools-manufactured teen-pop fakes. Hard to believe... (3 1/2 out of 4 stars)