[THE STANFORD PRISON EXPERIMENT opens Friday July 31st at the Cedar Lee Theatre in Cleveland and the Nightlight Cinema in Akron.] 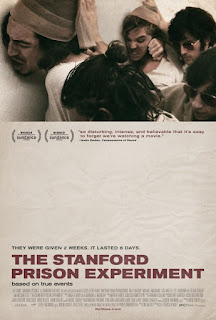 The first thing you notice in THE STANFORD PRISON EXPERIMENT is the butt-ugly early-'70s coiffures and facial hair adorning nearly every cast member. That and the incessant smoking, both of which are a lazy director's shorthand for, "Psst: this is a period movie, folks." For awhile that's pretty much all I noticed. Oh, yeah. And trying to identify the familiar faces underneath all of that mangy hair.

Truth be told, the film's basic set-up--based on a controversial real-life 1971 study conducted by Stanford professor Philip Zimbardo--did little to grab me. Certainly not the ham-fisted way it was playing out courtesy of Tim Talbott's glib, facile script (based on Zimbardo's book, "The Lucifer Effect: Understanding How Good People Turn Evil") and Kyle Patrick Alvarez's equally unsubtle direction. To put it in academic terms, STANFORD PRI was flunking out as both psychology and sociology.


But at the midpoint--I think it might have been when the titular experiment begins to disastrously disassemble and all hell breaks loose--the damnedest thing happened. Seemingly against my will, and despite all of my previous misgivings, reservations, complaints, etc., the movie began to exert an irresistible sort of pull, even a palpable tension. Maybe it was the performances, nearly all of which are impressive (Billy Crudup's wan Zimbardo is the one glaring exception). Or perhaps it was just the old-fashioned proscenium arch-style framing that brought back nostalgic memories of my college days spent watching agit-prop theater in countless off-Broadway venues. Despite Alvarez's valiant attempts to make it breathe cinematically with widescreen cinematography, a propulsive score, and remarkably effective sound design, the film would probably work just as well, maybe better, as a stage play.

Set almost entirely within the claustrophobic basement of Stanford University's Jordan Hall where Zimbardo's "observational study" took place in August 1971, THE STANFORD PRISON EXPERIMENT does nothing to help fill us in on the backgrounds of the 18 male participants who comprise the experiment. All we really know is that (a) they're students, and (b) each is to receive $15 a day for their participation in what's supposed to be a two-week simulation of prison life. The fact that everyone is virtually a blank slate actually works since we have no preconceived notions about any of them, or how they might react in such a pressure cooker environment. Zimbardo and his associates (one of whom is played, very nicely, by James Wolk, best known as the hapless Bob Benson on AMC's late, great "Mad Men") randomly select who will "play" guards or prisoners. (During their screening interviews, nearly everyone chooses to be a prisoner when asked which role they'd prefer.)

Quite frankly, the first half of the movie is rather tedious. The "prisoners" behave like docile sheep while the "guards," all of whom are to be addressed as "Mr. Correctional Officer," take an almost sadistic glee in their Alpha status. Watching everything on surveillance cameras is Zimbardo and staff who mostly cluck-cluck amongst themselves and take copious notes. Even with all of the prodigious thesping talent on display it's neither particularly compelling or edifying. Instead, the singular effect is that of watching gifted young performers work up a healthy sweat in an especially grueling actor's workshop.

It's only when the clinical study starts slipping irrevocably out of control that things get progressively interesting. Alvarez turns the screws so expertly that THE STANFORD PRISON EXPERIMENT somehow morphs into a gripping, edge-of-your-seat yarn. You might not learn anything new about peer pressure, abuses of power, or the roots of fascism that you didn't know going in (can you say Abu Ghraib?), but the performances are so electrifying and the action so kinetic at times that you aren't likely to care.

As the most hung-ho (unhinged?) of the faux guards, live-wire Michael Angarano comes close to stealing the entire movie. (He certainly has the juiciest role.) Equally impressive are Ezra Miller (the most rebellious inmate), Chris Sheffield (the most principled--and therefore the most victimized--inmate), Jesse Fletcher (a steely ex-con Zimbardo recruits to help "keep it real") and Olivia Thirlby who brings a much needed dose of estrogen to the testosterone-crazed environs as Zimbardo's fiancee. Also very good are Tye Sheridan and ME AND EARL AND THE DYING GIRL's Thomas Mann as sundry prisoners.


On second thought, maybe the actor's workshop vibe of the first hour was deliberate since, at its best, STANFORD PRISON serves as an attention-grabber of a calling card for Alvarez whose first two features (C.O.G. and EASIER WITH PATIENCE) were promising, yet failed to generate any significant traction. Alvarez ultimately proves that he's capable of crafting dynamic cinema even when working with material that, on paper, seems like the antithesis of what's normally perceived as "cinema" (CGI overkill, ADD cutting, ad nauseam) by 21st century Hollywood standards. As if. 3 out of 4 stars.
Posted by Milan Paurich at 2:57 PM