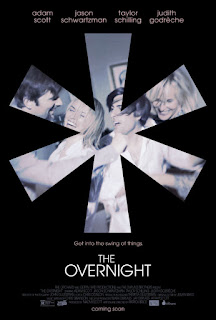 Certainly my abiding affection for Schwartzman-as-Max helped in navigating Kurt's considerable "ick factor." When we first make his acquaintance, Kurt is charming the pants off recently transplanted Seattle married couple Alex (Adam Scott) and Emily (Taylor Schilling from Netflix's "Orange is the New Black"). After an impromptu meeting in a Silver Lake park--their toddlers have just hit it off on the playground--Kurt impulsively invites mom, dad and RJ (RJ Hermes) over to his house for a playdate, both for the kids and their parents. Since Emily and Alex had been hoping to make some new friends, it's an offer they simply can't refuse.

The evening gets off to a pleasant enough start. Kurt's wife Charlotte (Judith Godreche) seems as smitten with her houseguests as hubby Kurt, and the grown-ups appear to be on the verge of becoming bosom pals. Very quickly, however, things begin taking a weird turn. When Kurt brags about Charlotte being a great actress, he proudly shows everyone a breast-pumping video in which his wife's, uh, talents are the star attraction. There's also the matter of Kurt's gallery of butthole paintings that he's affectionately dubbed "Portals." Then, after smoking pot and drinking way too much booze, Kurt and Charlotte propose that they all go skinny dipping in the backyard pool. (Cue Schwartzman's hilariously oversized prosthetic penis.)

Slyly satirical rather than laugh-out-loud funny, THE OVERNIGHT is more a study of the unique stresses of contemporary married life than it is any grand statement about the social mores of hip, thirtysomething Los Angelenos. (Despite its surface similarities, Brice's movie isn't a wink-wink, nudge-nudge 21st century update of Paul Mazursky's BOB & CAROL & TED & ALICE).

Both couples have seemingly reached a crisis point in their relationships. Kurt and Charlotte have grown increasingly distant sexually, and Alex is still adapting to his new role as house husband. (Emily's executive level job is what brought them to L.A. in the first place, and she's the one who, somewhat guiltily, brings home the bacon.) All four of them are desperately in search of something (anything?). For Kurt, it could be as simple as exploring his latent bisexuality. (With Alex's help maybe?) In Charlotte's case, it might be her side job at a Thai massage parlor.

Brice's skill at making his film as viscerally discomfiting for the audience as the increasingly outré onscreen situations become for Alex and Emily is undeniable. Instead of becoming a turn-off, though, it's actually quite impressive. Not everyone will share my enthusiasm. Some may feel a bit like RJ when, early in the movie, Alex asks whether he's having fun at the park. "Not really," the kid responds.

There's nothing particularly distinctive about the film's flat look--it shares the charming DIY shapelessness of movies co-directed by the producers, Mark and Jay Duplass (THE PUFFY COUCH, JEFF WHO LIVES AT HOME). But visual sheen has little to do with THE OVERNIGHT's considerable appeal. Think of it instead as a short (barely 80 minutes including end credits), semisweet, and wryly amusing palate cleanser in a particularly noisy summer of CGI bombast/overkill. (Don't tell me you actually had fun at TERMINATOR GENISYS or SAN ADREAS). On those admittedly narrow, if not unwelcome terms, it's something of a cockeyed triumph. 3 out of 4 stars.

Posted by Milan Paurich at 1:02 AM