The Last Movie (July 25th at the Cleveland Cinematheque)

[THE LAST MOVIE screens Saturday July 25th at 9:20 pm at the Cleveland Cinematheque.] 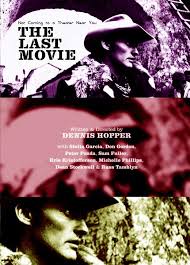 I had read a bit about THE LAST MOVIE while growing up, all of it negative. Various critics made out that actor-director Dennis Hopper's followup to his trendsetting hit EASY RIDER was a great example of a sophomore disaster, as a drugged-out "artiste" of cinema, spoiled rotten and riding high on the success of the earlier picture (plus various hallucinogens and pharmaceuticals), was given free reign to do as he pleased, and turned in an unwatchable, pretentious hippie-influenced mess.

(Making him, oh, how radically different from any other filmmaker over the past 40 years? Just asking)

THE LAST MOVIE even had an entry in Michael Medved's anonymously co-authored book of film-depreciation The 50 Worst Films Ever Made (And How They Got That Way), one of my favorite volumes of bilious film lore in the 1970s, even though, once VHS was invented and I actually started SEEING some of the 50 worst films ever made, I discovered that many of them weren't all that bad after all.

Then, one day in the late 1990s, the last time I had any expendable finances or hope the future, I conducted a mass-purchase of cassettes on behalf of my friends at the late, great B-Ware Video and Books in Lakewood. In the cache I actually found a VHS release of THE LAST MOVIE on the obscure United Video of America label.


I watched THE LAST MOVIE at last. And you know what?

No, it wasn't very good. But it wasn't so unwatchable and undecipherable as critics of the past several decades had declared, either.

Here's the thing. Maybe it was the drugs, maybe it was true genius. After all, as readers of Peter Biskind's Easy Riders, Raging Bulls knows, it's still a bit of a mystery who exactly directed EASY RIDER; everybody was pretty stoned, and Hopper, Peter Fonda and Bob Rafelson just sort of wandered in and out of the editing room, and by the end a remarkable classic resulted. But as far as THE LAST MOVIE, it became clear to me that Dennis Hopper merely invented, 22 years in advance, the same gimmick that would get Quentin Tarentino praise in PULP FICTION; he began THE LAST MOVIE with the third act, then let the story run chronologically through the first and second acts (though liberally spiced with flashbacks, flash-forwards and even one big "SCENE MISSING" card at a crucial moment).

Once you wrap your mind around the notion that Hopper's THE LAST MOVIE is modeled after that kind of Indian hoop-of-life story-structure thing maaaan, it makes a bit more sense. And so does the violently confused reaction of the movie reviewers of the era, who probably still considered Disney's FANTASIA to be the most challenging thing they'd ever beheld.

So what is THE LAST MOVIE? The setting is rural Peru, where a Hollywood movie crew (under Sam Fuller, one of many of Hopper's friends more or less playing themselves) is in the final stage of shooting a violent western. Director Hopper portrays a dissipated stuntman named Kansas, who had become the regular patron of a shallow local whore (Stella Garcia) who keeps begging him for American luxury goods. When the film shoot ends, Kansas stays behind in the village while the other VIPs depart.

But the Peruvian peasants have been so dazzled by Hollywood that they determine to imitate it, in the manner of those tribal "cargo cults" that documentaries of yesteryear used to go on about. The villagers fashion totem-like giant cine cameras and lights out of woven reeds, and begin emulating the pain and death depicted in made-believe by the Americans. Only they do not understand that it is only supposed to be make-believe.

As the only member of the film crew left is Kansas, he gets pulled into the project. The peasant antics grow more and more intense as a local Catholic-tinged festival approaches, and it looks like things aren't going to end well for the hero, as he watches whatever veneer of civilization this place has start to slough off under the power of `movie magic.'

But the basic idea is kind of intriguing, and some of the imagery of THE LAST MOVIE might actually stay with you longer than whatever Michael Medved is advising you to see these days (probably some inspirational sports drama).

Yes, the moral of THE LAST MOVIE is probably Friends Don't Let Friends Make Films (Especially on Drugs). And I watched while sober, which is my lifelong habit, but possibly not what the director intended. Hopper later recovered his directorial career, but it took a while, and THE LAST MOVIE continued to be a low point on his resume (and sobriety). But give it a chance. Worse is out there. Worse is probably on its way to the multiplexes as we speak. (2 out of 4 stars)
Posted by Charles Cassady Jr. at 12:00 AM