The Indie Gathering announces film lineup and awards for 2015

[Press release from the Indie Gathering.] 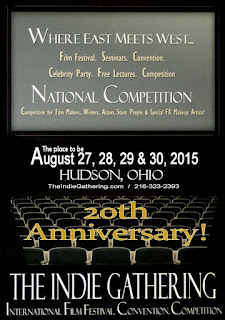 The Indie Gathering International Film Festival has announced its official awards list and film selections for the 20th annual edition of the festival. The Indie Gathering exists to showcase the independent filmmaker, with a mission to inspire and encourage film makers through a competitive showcase.


This year's festival will highlight a total of 138 films from around the world. These will screen in three screening rooms over a period of four days, August 27th-30th. The festival also features two days of film lectures and panel discussions, a convention, special effects makeup competitions, acting competition, stunt competition, networking parties and more.

All festival events will be held at The Clarion Inn & Conference Center, located at 6625 Dean Memorial Parkway in Hudson, Ohio, conveniently located between Cleveland and Akron. The full film lineup and the awards list for film, script and film scoring competitions can be found at www.theindiegathering.com, along with directions, ticket information and vendor information. Additional event updates will continue to be added as the event draws closer.
Posted by Bob Ignizio at 12:00 AM