The Cobblestone Corridor (now available on Vimeo on Demand) 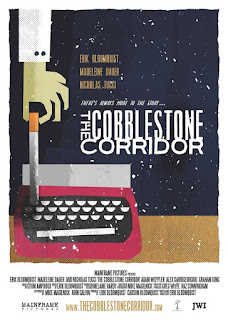 While watching Erik C. Bloomquist’s short film “The Cobblestone Corridor”, it’s nearly impossible not to draw comparisons to Rian Johnson’s BRICK. Although the plots are considerably different, both films transplant the archetype of the hardboiled private eye, along with dialogue right out of a forties Bogart film, into a modern day school setting.

The plot is that a teacher at a prep school has been fired for selling drugs to students. Editor of the school paper Alan Archer (writer/director Bloomquist) is convinced to dig deeper by the obligatory femme fatale, Elizabeth Merriweather (Madeleine Dauer). The actors play it straight, but there’s an undercurrent of light humor that flavors the proceedings, not necessarily to the film’s benefit.

Making old-school slang and genre tropes work in a contemporary setting is no easy task, and even good actors can have trouble selling their lines without coming across as awkward, or even tipping into unintentional parody. Given that it’s a low budget short, “Cobblestone” has a reasonably solid cast, but try as they might they never really sell us on the film’s conceit.

On the plus side, the film is polished and well paced, and even if they can’t quite make us buy that their characters are spouting these retro lines, the cast is clearly above average for the world of ultra low budget indie film. Even Bloomquist, who feels badly miscast as his own lead, comes across in such a way that I believe he’d be just fine in other roles. I couldn’t really recommend this to the casual viewer, but it’s a respectable effort, not completely devoid of entertainment value, that shows Bloomquist has promise both in front of and behind the camera. 2 out of 4 stars.

Watch 'The Cobblestone Corridor' on Vimeo on Demand: https://vimeo.com/ondemand/thecobblestonecorridor
Posted by Bob Ignizio at 12:00 AM