Tangerine (opens in Akron July 24th at the Nightlight Cinema)


[TANGERINE opens in Akron on Friday July 24th exclusively at the Nightlight Cinema.] 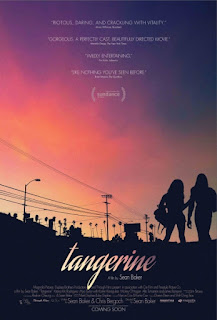 On Christmas Eve, transgender prostitute Sin-Dee Rella (Kitana Kiki Rodriguez) gets released from a short prison sentence only to learn that her pimp Chester (James Ransone) has been cheating on her with biological woman Dinah (Mickey O'Hagan), and boy is she pissed off. With her friend and fellow trans hooker Alexandra (Mya Taylor) Sin-Dee sets off on a quest for vengeance. Meanwhile Armenian cab driver Razmik (Karren Karagulian) picks up various fares until his story intersects with Sin-Dee’s and we learn that the married family man has a thing for performing oral sex on trans women. Such is the set-up for TANGERINE, the latest film from indie filmmaker Sean S. Baker.

With Caitlyn Jenner putting trans people in the news of late, interest in a film like this might be a little wider than in the past. But make no mistake, regardless of your opinions on Jenner, there’s definitely nothing “heroic” about Sin-Dee. She may be a woman scorned, but she’s also vain, volatile, and vindictive. The rest of the characters are equally flawed, and while it’s hard to really warm to any of them, their over the top banter can be amusing at times. Unfortunately, it can also wear out its welcome. It doesn’t help that the movie never really goes anywhere and has a tendency toward pointless digressions, best exemplified by the time spent with Razmik’s fares (including noted character actor Clu Gulager, probably just improvising his scene knowing him).

Other than its milieu, the most notable thing about TANGERINE is the way in which it was made: it was shot with three iPhone 5s smartphones. The results don’t look any worse (or better) than a lot of low budget indie films shot in a more traditional fashion, so if you’re a would-be indie filmmaker who bemoans not being able to afford to make a movie, this definitively proves you no longer have an excuse. That’s all well and good, but it doesn’t change the fact that the finished film, however it was made, isn’t particularly good. Though not without merit, for the most part it’s yet another pointless mumblecore exercise that seems to think just showing us “real” people compensates for having a story to tell and/or compelling themes and/or interesting visuals. Of course the Duplass brothers, the gurus of this sort of anti-cinema, are involved as executive producers. 2 out of 4 stars.
Posted by Bob Ignizio at 12:00 AM