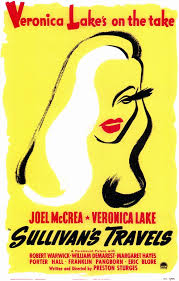 For me, Preston Sturges' SULLIVAN'S TRAVELS, from 1941, belongs to a small handful of American screen classics from the golden age of the studio system - Ernst Lubitsch's TO BE OR NOT TO BE is another - that actually kind of depress me in a strange sort of way. Because, as much as I enjoy them, I mourn the fact that nobody makes movies this champagne-sparkle splendid anymore. We just can't. Not with all our digital-editing suites and cool camera technology, we just don't have the knack anymore to put together the ingredients of a perfect script, ideal casting, tasteful cheekiness, idol-level actors, pitch-perfect music etc.

Kind of like the way Cleveland can't win a sports championship, no matter what. Like the way the good jobs will never come back here.
Know what I mean? It's just sad, the quality we lost that can't be regained. SULLIVAN'S TRAVEL is just that great.


The film opens with one of the great cinematic fakeouts of all time, a violent fight-to-the-death atop of runaway locomotive between roughnecks that kills both men. Turns out it's only the over-the-top climax of a movie, a serious "message picture" about class warfare and poverty, being screened for skeptical studio chiefs by John Sullivan (Joel McCrea). He's a hotshot Hollywood director with two - count  'em - butlers and a string of broad comedy hits.

But, with the Great Depression, Communism and war clouds on the horizon, Sullivan now demands freedom to do a thunderously tragic sociopolitical drama. "With a little sex!" demand the studio execs. the dream project is to be called "Oh Brother Where Art Thou?" - and, yes, that inspired the title of the Coen Brothers folk-musical comedy of the same name. To get it just right Sullivan demands to experience poverty and desperation personally, masquerading as a homeless vagrant.

The studio brass grudgingly cooperates and, sensing the PR bonanza, dispatch a photographers, secretaries and minders to monitor Sullivan. Temporarily escaping their scrutiny, Sullivan gains a touring partner in the form of a struggling wannabe actress (Veronica Lake) on the verge of giving up her Hollywood dreams.

Together they experience hunger, deprivation and charity in hobo camps and church kitchens. Finally, when Sullivan seems ready to begin his masterwork, a dangerous twist throws him into real jeopardy and misery, and he realizes what his audiences really want and needed all along.

SULLIVAN'S TRAVELS was an instant hit when it opened, and even though grounded in 1930s Depression-era anxieties and issues, it still charms today - maybe even more so, considering how much range of emotion writer-director Preston Sturges evokes, from hilarity to horror, while staying PG-restrained under the old-school Hollywood censorship system. I remembered being spellbound with it as a boy watching it on TV, from the first brutal frame of the counterfeit "Oh Brother Where Art Thou?" as a curtain-raiser to the spine-tinglng Negro-spiritual performance at the end that heralds Sullivan's epiphany about the basic need to laugh and be entertained. No matter how bad things get. Rapid-fire dialogue and zinger observations still hit the target.

Sturges, himself a director of brainy comedies, thought his fellow filmmakers were going a bit overboard with seriousness and preaching, and here he masterfully defends the universal human condition that responds to comedy. It's a must-see for movie lovers yesterday, today and tomorrow - though what a sight it must have been in 1941 (before Japan came along and ruined the year for our ancestors).

If you do a search-engine thingy for poster art for SULLIVAN'S TRAVELS you find most of the ads focusing on striking leading lady Veronica Lake, whose breakthrough film this was. I am given to understand that Lake's early-1940s ascent to stardom (with her distinctive peek-a-boo hairstyle) was really a never-before-never-again thing in American popular culture. I feel rather sorry I missed out on that, and on a society in which something as beautifully done as SULLIVAN'S TRAVELS could be expected from the Hollywood dream factory on a regular basis. Have we lost the touch or what? (4 out of 4 stars)