Rock Hall to Host Film Screening of THE DAMNED: Don't You Wish That We Were Dead

[Press release from the Rock & Roll Hall of Fame and Museum.] 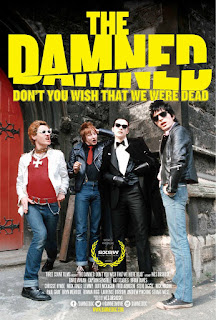 The Rock and Roll Hall of Fame and Museum will host a special film screening of THE DAMNED: Dont You Wish That We Were Dead at 7 p.m. on Friday, August 21, 2015 in the Museums Foster Theater. Following the screening, director Wes Orshoski will participate in a question and answer session with the audience.

The event is free with a reservation through the Rock Hall website at tickets.rockhall.com or at the Rock Hall box office. Seating is limited. Rock Hall Members can RSVP starting at 10 a.m. EST on Monday, July 20.  Non-Rock Hall members can RSVP starting at 10 a.m. EST on Tuesday, July 21.
From Lemmy filmmaker Wes Orshoski comes the story of the long-ignored pioneers of punk: The Damned, the first U.K. punks on wax and the first to cross the Atlantic. THE DAMNED: Don't You Wish That We Were Dead includes appearances from Chrissie Hynde, Mick Jones (The Clash), Lemmy and members of Pink Floyd, Black Flag, GNR, the Sex Pistols, Blondie, Buzzcocks, and more. Shot around the globe over three years, the film charts the band's complex history and infighting, as it celebrated its 35th anniversary and found its estranged former members striking out on their own anniversary tour, while still others battle cancer.


Wes Orshoski made his film debut with 2010's Lemmy, the documentary celebrating the life of Motorhead singer Lemmy Kilmister. In addition to film work, Orshoski has for more than 20 years worked as a music journalist and photographer. His work has been published in Mojo, Rolling Stone, Billboard, The Source, and many others.

The Rock Hall focuses on the development of punk music in London, New York and Los Angeles in the Blank Generation case inside the Cities and Sounds exhibit. Items that rotate for exhibition include Joey Ramones leather jacket, Johnny Ramones most used guitar, Joe Strummers Fender Telecaster, the handwritten lyrics to London Calling, Sid Vicious outfits, and other artifacts from Blondie, Patti Smith, Talking Heads and more.

To commemorate Alternative Press unparalleled 30 years of championing underground music and breaking some of the biggest names into the mainstream, the Rock Hall is unveiling a special new exhibit, Never Give Up: Alternative Press Magazine at 30 on Tuesday, July 21, 2015. Presented by Roadrunner Records, Fueled By Ramen and Jakprints, the exhibit will feature a history of the magazine, its best stories and photos, and how the publication contributed a much-needed voice to the underground over the years. Items on display include contact sheets from various photo shoots, cover art from hundreds of issues, letters to Alternative Press magazine from fans and celebrities, video interviews with musicians featured over the years, a Gibson 2013 Joan Jett signature model guitar signed by artists from the 2014 Alternative Press Music Awards, a pajama top worn by Jay Bentley of Bad Religion onstage at every show during the 1998 Vans Warped Tour, a snare drum played by Byron McMackin of Pennywise during the 2001 Vans Warped Tour, and more.

Fridays from 1 to 2 p.m., through August 14, 2015, the Rock Hall educators will host a one-hour program spotlighting the lives and music of the 2015 Rock and Roll Hall of Fame Inductees The Paul Butterfield Blues Band, Green Day, Joan Jett & the Blackhearts, Lou Reed, Stevie Ray Vaughan & Double Trouble, Bill Withers, Ringo Starr, and The 5 Royales.  The session will also include a detailed breakdown of the induction process.  The program is FREE with Museum admission and seats are available on a first-come, first-served basis.

For more information on the Rock Halls exhibits, events and more, visit rockhall.com.

Email ThisBlogThis!Share to TwitterShare to FacebookShare to Pinterest
Labels: Cleveland OH, Documentary, news, punk rock, Rock and Roll Hall of Fame, rock music, The Damned: Don't You Wish that we Were Dead