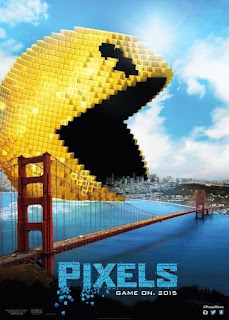 Extraterrestrials watch a video time capsule showing eighties arcade games, take it as a declaration of war, and send giant-size versions of the digital creatures back to earth to attack us. The only hope for our planet are the nerds who excelled at those games back in the day. With a high concept premise like this one, PIXELS had the potential to be this generation’s GHOSTBUSTERS. With Adam Sandler’s Happy Madison company producing, and Sandler in the lead role, PIXELS had the potential to be, well, another Adam Sandler movie. Which, in case  you’re one of the lucky few who has never seen any of his cinematic endeavors, generally ranges from mediocre to bad. PIXELS winds up just on the good side of mediocre, which is a win for Sandler, but still a loss given that it could have been better.


The film is directed by Chris Columbus, perhaps best known as director of the first two HARRY POTTER and HOME ALONE films. He’s not exactly a filmmaker to excited about, but he’s not a complete hack, either, and he knows how to handle one of these effects heavy blockbusters. Not to mention he knows how to deal with big stars and their big egos. That PIXELS comes out watchable at all is almost certainly due in no small part to his efforts.

Sandler is his usual smart ass “regular guy” persona here, never really selling us on being a nerd. His fellow gamers Josh Gad and Peter Dinklage are more convincing as social outcasts, while Kevin James as the President of the United States (and childhood friend of Sandler’s character) is neither funny nor believable in the role.. Michelle Monaghan is mainly on hand to provide the film with an unconvincing love interest for Sandler, but as a special weapons developer for the military she does at least get to participate in the actual story and, towards the end, even joins the boys in fighting off the invaders. Brian Cox is on hand as a general whose only purpose is to give Sandler a stick in the mud to riff off of, and Jane Krakowski is completely wasted as James’ first lady.

Once the plot gets rolling, though, the film manages to deliver some great set pieces as various games come to life and attack the earth: first Galaga, followed by Centipede, Pac-Man, and of course, the one game Sandler’s character sucks at: Donkey Kong. Not only does the action work, but there are some funny gags to boot. Unfortunately, the casual, oblivious sexism that runs through almost all of Sandler’s films is here as well. And for a film marketed to families, it seems stupid to throw in so many uncomfortable (and unfunny) jokes of a sexual nature. I guess Sandler just can’t help himself.

So in short, PIXELS is kind of enjoyable when it isn’t being creepy. It’ll hit the nostalgia button for people my age with the video games and the soundtrack. It stars Sandler and James, two of the least likable stars of this or any era, but at least Dinklage is kind of fun playing the biggest asshole of the group. Check it out, I guess? 2 ½ out of 4 stars.
Posted by Bob Ignizio at 12:00 AM