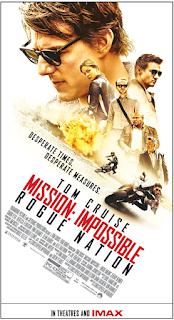 The MISSION: IMPOSSIBLE film franchise is almost 20 years old. Not bad for a series of movies based on a TV show from the 60s. In fact, the show only lasted 7 years and the brand is far more recognized as THE Tom Cruise (KNIGHT AND DAY, RISKY BUSINESS) franchise.

So here in its 19th year we have a 5th entry named MISSION: IMPOSSIBLE - ROGUE NATION (with a new one already scripted and ready to shoot next year), and despite the age of its leading man, a lean and mean 53 year old Cruise, the series is as frantic and action packed as ever. This new entry might not offer much new in the way of plotting or action but it rarely stops for air as the story unfolds and keeps you on the edge of your seat for much of its 131 minute runtime.

My favorite of the franchise is the third, with the second being my least favorite, so this fifth entry is right around the middle of the pack. If you are already a fan of the series you will not be disappointed, as it delivers all the hallmarks you have come to expect. Message blowing up in 5 seconds - check. Ethan Hunt hanging off of a fast moving vehicle - check. Mysterious sexy lady caught in the center of the mystery - check. Exotic locales around the world - check. ROGUE NATION follows the formula to the letter.

Tom Cruise is often disliked by folks, but I have always enjoyed him as an actor. I feel people project some sort of hatred to certain actors due to some of their off screen decisions like odd religions (like any religion isn't odd?) or proclaiming love while jumping on a couch on TV, but I always try to judge an artist for their work and not for the things they do or say in their personal life. Except Ted Nugent, he should never be allowed to talk or record music again... but I digress. Cruise may be a lot of things but lazy is not one of them. The guy works very hard on his career and it shows as he is nothing less than awesome performing many of his own stunts, including hanging off of a plane. Every set piece is outstanding with my favorite being a mid-film underwater sequence that had the entire theater of people gasping and cheering. Great stuff!

The supporting cast is also top notch and entertaining. Ving Rhames (PULP FICTION, DAWN OF THE DEAD), Jeremy Renner (MARVEL'S THE AVENGERS, THE HURT LOCKER) and Simon Pegg (STAR TREK, SHAUN OF THE DEAD) all return to join franchise newcomers Alec Baldwin (MIAMI BLUES, THE HUNT FOR RED OCTOBER) and Rebecca Ferguson (HERCULES) for a plot that sees the IMF disbanded and Hunt left out in the cold, mid-mission, to try and figure things out. That is really all you need to know about the plot. I mean, at times you have to just trust that the action sequence will lead you to some exposition and other times it feels like they were making it up as they went along, but it is mostly just ass-kicking fun and THAT is what really matters.

Christopher McQuarrie co-write and directs this competent spy thriller with the confidence of an artist that has always been in the game despite the fact that this is only his 3rd film (and second with Tom Cruise).  I see him becoming an A list action director in the near future as this is his best thus far, and that says something as I enjoy his other films quite a bit. THE WAY OF THE GUN and JACK REACHER both hit the action G-Spot and M:I 5 hits it even harder, so I expect we will be hearing from Mr. McQuarrie a bunch in the coming years.

And there you have it, the bottom line is this - if you like the MISSION: IMPOSSIBLE movies you will certainly enjoy MISSION: IMPOSSIBLE -ROGUE NATION. If this is your first experience with these films and you are a fan of the action/spy genre you will enjoy it. It is sexy, fast, witty and fun. Exactly what is needed on a hot summer day! I give this one a 3- out of 4 (are we allowed to use a minus sign in these reviews? Because I just did)
Posted by Bob Ignizio at 12:00 AM