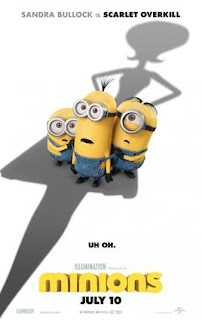 The theory of evolution does not, as some believe, posit the “survival of the fittest”. Rather, it says that creatures will evolve to fill particular niches where they can excel. As we learn early in MINIONS, the titular creatures evolved to be the flunkies for more ambitious evil-doers. Not particularly competent flunkies, but flunkies nonetheless. After aeons of this servitude, the creatures suddenly find themselves without a boss for an extended period of time, and malaise sets in. Finally, a member of the tribe named Kevin steps forward and offers to seek out a new master. And so along with fellow minions Bob and Stuart, Kevin sets off for the big wide world of 1968 New York (all the minions are voiced by the film’s director, Pierre Coffin).

Kevin soon learns about a top secret convention of super villains being held in Orlando, Florida. Hitching a ride with a family of bank robbers, the minions decide to hitch their wagon to rising villainess Scarlett Overkill (Sandra Bullock). Scarlett takes the minions to her castle in Britain where, along with her inventor husband Herb (Jon Hamm), she plots to steal the Queen of England (Jennifer Saunders)’s crown. The minions promise to help in this endeavor, even before being threatened by Scarlett, but instead wind up getting Bob crowned the new King of England through a series of accidents. This does not sit well with Scarlett, who comes gunning for revenge. Can the little guys possibly save themselves, and just maybe England as well?

One’s expectations for MINIONS, unless one is a diehard fan of the characters from the DESPICABLE ME series, can’t help but be low going in. Not only is it the third film in a franchise that arguably never should have had a second installment, it spotlights characters who were meant to be minor comic relief players, not stars. And so because those expectations are so low, the film just barely manages to exceed them. It’s no classic, but it is funny and engaging, especially for the kids, but not too bad for the grown-ups, either.

Does it make sense for these guys to be heroes? No, not really. Does it make sense that they’d be so colossally bad at the job they were evolved for that every one of their past masters dies shortly after taking them on, except for Gru in the DESPICALBE ME films, who seems to get quality evil work out of them? No, it doesn’t. Is anyone watching this other than a nitpicky critic likely to care? Probably not.

Sure it’s a cash grab, but it’s not nearly as cynical a one as it could have been. You want animation as an artform? WHEN MARNIE WAS HERE may still be showing somewhere, and should be out on home video soon. You should watch it; it’s great. But if all you want is a little entertainment for you and/or your kids, this’ll do. 2 ½ out of 4 stars.
Posted by Bob Ignizio at 12:00 AM