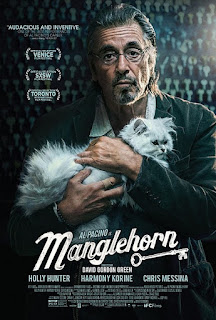 Al Pacino plays a lonely locksmith with anger management issues who obsessively pines for a lost love while ignoring the possibility of real connections in the present in David Gordon Green’s MANGLEHORN. A.J. Manglehorn (Pacino) is a widower who dotes on his granddaughter but doesn’t have much use for his stockbroker son Jacob (Chris Messina). Manglehorn makes small talk with a teller at his bank, Dawn (Holly Hunter), but the only living creature he’s really close to is his cat Fanny, who it turns out has swallowed a key and needs surgery. And seemingly imported from one of his own films, Harmony Korine plays the owner of a tanning salon/massage parlor who Manglehorn used to coach in Little League, and who still looks up to the aging curmudgeon.

In terms of plot, there isn’t much. Basically, Manglehorn is kind of eccentric, kind of a son of a bitch, and kind of a pathetic stalker who keeps sending letters to a lost love who keeps sending them back. There are a lot of oddball touches and heavy handed symbolism – one particularly egregious example is the hornets next hanging off of Manglehorn’s mailbox, which he opens frequently in the film. I won’t give away the ending, but it’s a groan inducing bit involving a mime. None of this stuff rings true, nor does it play particularly well as magical realism or indie quirkiness or whatever the hell Green and screenwriter Paul Logan were going for.

Ah, but this is the kind of character study that actors love, and that love comes through in the performances. Pacino has largely become a caricature of himself in recent years, but here he turns in a subdued and nuanced performance that almost makes his ball of quirks character believable. Holly Hunter is fantastic, too, particularly in a scene where her character is having dinner with Magnlehorn and we see her go from the giddiness of a first date to sadness, anger, and shame as the clueless old man displays his insensitivity at its worst.

As a character study, MANGLEHORN is okay, I suppose. Green’s dreamy visual style and tone are also in effect, and that’s nice enough as far as it goes. It just doesn’t go quite far enough to make up for a minimal plot that casually moseys along to a contrived payoff that fails to satisfy. 2 ½ out of 4 stars.
Posted by Bob Ignizio at 11:05 PM