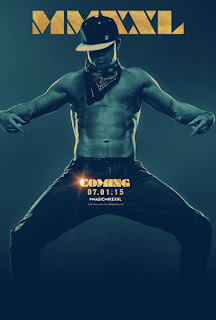 Steven Soderbergh's delightful, breezy MAGIC MIKE used the backdrop of the economic recession to follow a pack of well-intentioned, down-trodden hard bodies between the sun-bleached malaise of Florida's coast and the high camp of gimmick-driven strip club theatrics. Gregory Jacobs’ MAGIC MIKE XXL, for which Soderbergh served as cinematographer, ditches both the cultural reference point and much of the humorous visual flair of the original.

XXL is, as the title inadvertently suggests, a bit flabbier than its predecessor, lugging a bloated narrative at a disappointingly sluggish pace.

This sequel starts up three years after the first film, with Mike (Channing Tatum) working full time as a furniture builder – you know, the business he spent the entirety of the previous movie desperately trying to scrape together? Well, it’s also the business he immediately abandons when former Xquisite dancers Ken (Matt Bomer), Big Dick Richie (Joe Manganiello), Tarzan (Kevin Nash), and Tito (Adam Rodriguez) show up and suggest that they gyrate on up to ye olde South Carolina stripper convention for one last pec-popping performance.

What ensues is your typical road movie, as the boys make their way from the drag clubs of the coastal swamps to the debutante-haunted mansions of the deep south.

On the comedy end of things, MAGIC MIKE XXL has a Matthew McConaughey-shaped hole in it. It’s not so much the absence of the actor that hurts, but rather the energy and absurdity his character Dallas, the boys’ former MC, contributed to the film. My favorite part of MAGIC MIKE was watching the literally balls out creative lunacy of elaborate costumed routines that were, as stereotypical female sexual fantasies go, as much parody as catharsis.

XXL replaces McConaughey with Jada Pinkett Smith, who plays the implacably chill, matriarchal Rome. Rome runs a high-end, gimmick-free nightclub in which the female customers are made the center of attention by dancers who express themselves without props or spotlights, but rather with their sweaty, twerking man-shanks alone.

Rome’s ethos of male dancers performing for - rather than to or at - women as a means of dismantling the inherently hierarchical relationship between performer and audience is interesting from a feminist perspective. But as a heterosexual male with no interest in dance, it makes the proceedings kinda boring.

(Sexy or not, there’s no arguing that an extended bit in Pinkett’s club literally grinds the movie to a halt as we endure scene after scene of characters we’ve never seen before underwear dancing in cleavage-crowded half-dark.)

Don’t get me wrong – if MAGIC MIKE XXL had chosen to flip MAGIC MIKE’s tonal script entirely, letting the drama play out on stage in a g-string while the comedy lived among the Carolina-bound shenanigans in between, I would have been impressed as well as entertained. But even the road trip – a classic venue for hijinks – is hijacked by melodrama and a pervasive sense of existential dissatisfaction that lacks the punch it carried the first time around.
Introducing a gaggle of sexually frustrated Georgian MILFs to a parliament of male strippers, for example, yields predictable results. And the waifish, wandering wannabe photographer who repeatedly crosses paths with Mike doesn’t wear her disaffection well.

All this to say: if you’re into dudes, and enjoy watching incredibly ripped, hot guys who are also ludicrously talented dancers getting all sweaty and rubbing their junk on girls’ faces, your viewing experience probably won’t be quite as fraught as mine. (2 out of 4 Stars)
Posted by Matt Finley at 12:00 AM