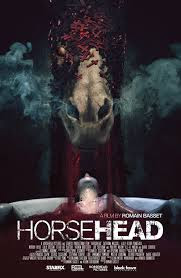 This, un film de Romain Basset, was conceived under the working title "Fever" - which is much more apt for the feverish stream of surreal horror imagery, seemingly in tribute to yesteryear's hallucinatory Italian "giallo" cinema exemplified by cult-darling directors Dario Argento, Lucio Fulci, Michele Soavi (especially) and the father-son team of Mario and Lamberto Bava.
Only here there's even less of a solid plot, if possible.

Out-and-out horror films are a rarity in French cinema, to the point that a lot of the genre's Gallic fear-fests default to surrealist Jean Cocteau and his ORPHEUS and BEAUTY AND THE BEAST.

Well, HORSEHEAD isn't near that good, but one can at least see a certain influence in the thin plot, most of which appears to be a string of nightmares.

A disciple of "lucid dreaming," Jessica suffers repeated nightmares of a horse-headed apparition, obviously inspired by the fearsome steed in Fuseli's painting "The Nightmare" (that's the one with the little gremlin-like guy sitting on a girl's chest. And no, the gremlin-like fellow doesn't show up here. Maybe the sequel). These intensify as she overnights with her grandmother's corpse in the very same house, and Jessica "investigates" in her sleep, triggering flashbacks to her female ancestor's involvement in an occult-fertility ceremony involving some kind of nasty quasi-Catholic cult called St. Winston's Chapel.

Is Jessica Destined To Give birth To The AntiChrist? Or possibly the AntiAntiChrist (which would be the Christ2). Or maybe she just doesn't get along with mom. Really, any interpretation is fair game, just as long as Horsehead trots in every so often and acts ominous, until Jessica faces the spectral animal in a showdown.

Some really transfixing visuals are accomplished on a thin budget, but I won't knicker against neigh-sayers who agree that there's not much going on here. But I do hope Basset continues to forge on; maybe his next script will be a horse of a different color. (1 3/4 out of 4 stars)