[GORE ORPHANAGE had its premiere Saturday July 11th at the Sandusky Theatre in Sandusky, OH.] 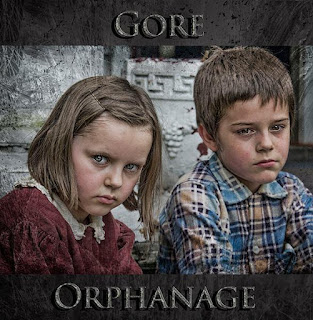 Saturday July 11, 2015 at the Sandusky State Theater in Sandusky, Ohio was a magical night as the much anticipated film GORE ORPHANAGE had it's world premiere. Starting off with a "meet and greet" with the cast and crew, followed by the "Red Carpet Ceremony" where cast and crew we're delivered in vintage era cars and announced as they walked the red carpet. I was lucky enough to walk with my friend Maria Olsen, who stars in the film as Mrs. Pryor, Head Mistress of the orphanage. Her character is more concerned with the money coming in than the children. She does spend quality time with the children though, making them degrade themselves in chants and even physically hitting them at times.

The story revolves around the famous legend of the Gore Orphanage located in Vermillion, Ohio located a few miles from where the Sandusky premiere occurred. The legend is that since the orphanage burnt down you can still hear the children screaming and crying for help. Some say the orphanage never existed, although only extensive research would show that. Nonetheless, the legend is "legendary", and it has been made into a really great film!

Written by Executive Producer Cody Knotts and directed by his beautiful wife Emily Lapisardi, this film delivers all the goods. If you’re looking for gore, your outta luck here. But the atmosphere and soundtrack music let you know this film is in it for the disturbance, which is far more awesome than anything gore can give in its most exploitive. The story concerns a new girl delivered to the orphanage because her entire family was killed, and the kids in the orphanage are to be her new family. Certain children are killed off, and we see who did it and why. Certain kids not getting along with others for example.

There are several sub-plots that connect  to the main story. Like the janitor of the orphanage offering girls cookies to hang out with him. While anything sexual is not addressed directly, it is implied, and our main character Nellie played by Emma Leigh Smith gets her chance and runs out on the monster leaving her friend.  She's no dummy! Several scenes stand out as well, as every time Mrs. Pryor feeds the children the food looks like disgusting slop. After the first girl was killed I was wondering if that's what the children were eating! In one scene Mrs. Pryor is away from the orphanage and the kids get served bacon and eggs! They were definitely happy that day! The ending to the film is very unexpected as it exposes the killer, and the final scenes are very disturbing. Emily Lapisardi knows how to make a great Horror film and isn't ashamed to give us the goods!

After the film's showing people got to take pictures with the cast outside the theater. It was really cool seeing these young kids who starred in the movie  signing autographs and taking pictures. About 1,000 or so people showed up to this event and it was very spectacular indeed. Just keep this on your list of movies to see. Certainly a modern day classic that us Horror fans need in today's output of crap! And here comes this little film that puts them all to shame!

(For more horror movie news, reviews, and interviews, check out Mike's  fanzine Bloodfeast, Inc.)
Posted by Bob Ignizio at 12:31 AM