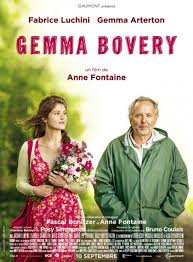 Was Gustave Flaubert's Emma Bovary the original "Desperate Housewife"? A bored trophy wife who turned to adultery as a way of escaping the tedium and dull conformity of middle-class life, Emma was clearly ahead of her 19th century time. Which probably explains why Flaubert's masterpiece has been filmed so many times, and in so many different ways. World-class auteurs as diverse as Jean Renoir, Vincente Minnelli and Claude Chabrol have all taken a crack at Emma. Just last month the latest iteration (Sophie Barthes' MADAME BOVARY starring Mia Wasikowska as the titular heroine) briefly played Cleveland area theaters.

While not a literal adaptation, Anne Fontaine's GEMMA BOVERY--like the graphic novel by Posy Simmonds its based on--takes Flaubert's most enduring work as its principal source of inspiration. A welcome return to form for Fontaine whose most recent films have been either disappointing (waxworks biopic COCO BEFORE CHANEL) or downright disastrous (Australian-made farrago ADORE with Naomi Watts and Robin Wright). With GEMMA, Fontaine brings the same sly wit and voluminous sensuality that have always characterized her best work (including DRY CLEANING and NATHALIE).

The splendid Gemma Arterton plays the title character, a blushing bride who has recently moved from England to a quaint Normandy village with her older husband (Jason Flemyng). It's never entirely clear why Charlie and Gemma Bovery (notice the difference in spelling) have moved to France in the first place. (Possibly as a way of fleeing Charlie's clinging ex wife?) At first, the (relative) newlyweds' lives appears to be nothing but bucolic bliss. Charlie restores antiques while Gemma does the occasional interior design job. Plus, there's an absolutely fabulous bakery nearby that makes the most scrumptious breads and pastries.

In fact, it's the resident baker, cagily played by inveterable scene stealer Fabrice Luchini, who's the real problem. A closet literature buff (he reveres Flaubert and "Bovary"), Martin instantly makes the connection between Gemma and her (almost) namesake. Throughout the course of the film, it's as though he wills Gemma into following the same self-destructive path as poor Emma. Her fling with a strapping boy toy (Niels Schneider) is the first sign that not all is well in the Bovery household. And when a dashing, newly divorced old flame (Mel Raido) appears, seemingly out of the blue (or maybe as a byproduct of Martin's overactive imagination), it's clear that Gemma is in way over her pretty little head.

Watching from the sidelines--sometimes lasciviously, sometimes in an almost paternal fashion--Martin is powerless to prevent the inevitable from happening. When he finally confronts her, expressing concern that she'll wind up committing suicide like Emma, she blithely responds, "I'm me; I'm free; I'm capable of being happy." Gemma's seemingly pragmatic approach to adultery, stripped of adolescent romantic illusions, belies the tempest quietly brewing just beneath the placid, picture postcard surface.

Because so much of the movie plays out in such a light, summery, sensual note, Fontaine's bittersweet ending has an unexpected and potent sting. Beautifully lensed by Christophe Beaucarne who gets fantastic scenic mileage out of the overripe settings, GEMMA BOVERY could almost pass as a travel brochure for Air France. Sexier and smarter than your average rom-com, Fontaine and her cast of gifted farceurs prove that the title of Preston Sturges' 1955 film, THE FRENCH, THEY ARE A FUNNY RACE still holds true. Even if some of them are transplanted Brits. 3 out of 4 stars.
Posted by Milan Paurich at 1:10 AM