Felt (opens in Akron July 17th at the Nightlight Cinema)


[FELT opens in Akron on Friday July 17th exclusively at the Nightlight Cinema.] 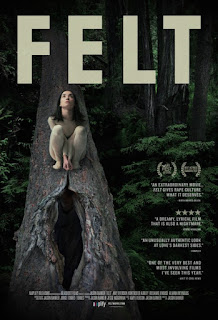 The final moments of FELT play out like a cross between Leatherface’s twirling dance at the end of THE TEXAS CHAIN SAW MASSACRE and the deliriously “what the fuck” conclusion of SLEEPAWAY CAMP drained of all traces of badfilm campiness that might allow a viewer to laugh it off. Like those two scenes, the scene is a truly indelible few minutes of cinema that will likely stick with viewers long after the film is over. The trick is sticking with the movie long enough to get there.

FELT begins by introducing us to Amy (Amy Everson), a woman who has been through some kind of awful experience, although exactly what the film never specifies. Amy’s friend Elizabeth (Elisabeth Ferrara), although initially supportive, really just wants her to get over it and go back to being fun. To this end, she sets Amy up on a series of blind dates with guys who all turn out to be assholes. Suffice it to say, this doesn’t help much.

To some degree, this material feels a lot like your usual indie relationship film about how awful the dating scene is, and all guys (or girls, depending on the film) are jerks (or bitches) However, there’s a disturbing undercurrent. For instance, when Amy jokes about going on a killing spree to make herself feel better, you get the sense she’s not really joking. And then Amy starts to make costumes for herself that are exaggerated portraits of sexuality. Mostly she wears male costumes incorporating big fake muscles and big fake penises, although occasionally she puts on a similar female outfit. Dressing in these costumes makes Amy feel better, like a superhero as she describes it, but doesn’t do much for the comfort level of those around her.

Eventually Amy begins a relationship with Kenny (Kentucker Audley), a guy who seems like a sensitive, caring, and honest human being. The movie then spends a fair amount of time with their quirky, artist-type romance, and the audience starts to wonder if maybe things will get better for Amy. In a traditional relationship movie, there’s probably be some sort of misunderstanding or one of the characters would do something stupid or insensitive, but it would all work out in the end. This isn’t that kind of movie.

FELT’s themes have been praised by a number of critics as a scathing indictment of “rape culture”. I guess. But isn’t this really just the same old rape/revenge plot from THE LAST HOUSE ON THE LEFT or I SPIT ON YOUR GRAVE, only in this case the revenge gets administered on a victim who wasn’t actually responsible for whatever horrible experience was inflicted on the film’s protagonist? Is Amy really, as critic Devan Faraci says in his review for birthmoviesdeath.com, “a woman who embodies the idea that we’re stronger in the places where we are broken,” or is she just another stereotypical cinematic “crazy bitch” escaping into violence and insanity? I don’t really have the answer to that, other than to say that’s always been the dilemma with these kind of movies.

My main issues with FELT, however, are with the filmmaking itself. The first 75 minutes of are formless and meandering, very much in the mumblecore/artsy indie film mode. Director/co-writer (with Everson) Jason Banker shoots handheld documentary style, and much of the dialogue is improvised. I don’t necessarily mind when scripted films go for a cinema verite feel, but this feels like a really pretentious film school student making their thesis film. Obviously this approach has its fans given this kind of thing has become in recent years, but I do not number myself among them. At least Everson’s performance is strong, and that final scene is one hell of a payoff. 2 ½ out of 4 stars.
Posted by Bob Ignizio at 12:00 AM