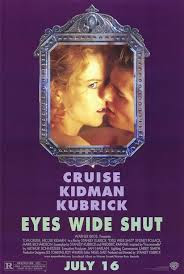 Nobody should be blamed for having trouble keeping their eyes
open during EYES WIDE SHUT. Stanley Kubrick's scandalous final feature film was released in 1999 after a much-publicized, drawn-out, two-year production history (nothing unusual for Kubrick) and hitting screens not long after Stanley Kubrick's own death. The heavily hyped melodrama is 169 minutes long, and you feel every second. Sometimes that is a good thing. And sometimes...

Kubrick had a reputation for jumping with graceful unpredictability from one genre to another, from horror in THE SHINING to costume drama in BARRY LYNDON to sword-and-sandal in SPARTACUS, and back again. Here he takes on the much-travestied sexual psychodrama-cum-thriller, the territory of countless direct-to-video softcore films (not to mention Times Square "grindhouse" stuff and Euro-thrillers, before BASIC INSTINCT kind of made the genre respectable).

And so what you've got to ask yourself is: even if Kubrick does make the world's most baroque, certainly longest T&A film...so what?

But EYES WIDE SHUT is more than just that, though what exactly it is remains open to question. A miscast Tom Cruise - try to imagine Richard Gere, or George Clooney, or somebody with a touch
of gray in their temples instead - is hotshot NYC physician Doogie Howser--whoops, we mean Bill Harford, who lives in affluent splendor and nine years of marital bliss with his wife Alice (Cruises' real-life spouse at the time Nicole Kidman). During a peculiarly Godless and snowless Christmas season, the Harfords attend an elegant party in which both partners in this sexy couple get hit on by badly-caricatured Eurotrash. Bill and Alice start to doubt each other's marital fidelity.

For the husband the feelings take flight one weird evening when he's called out to attend to the death of a longtime friend. At several times the opportunity beckons for Bill to cheat (for revenge?) on his wife, the circumstances getting progressively more bizarre.

The undeniable highlight is a chanting, masked, secret-society cult of hedonists in a spooky old mansion. Done by any other filmmaker this might have been laughable, but Kubrick's vision is genuinely decadent and disturbing, a Dante-esque orgy of large-breasted nudes contorted all over the High Renaissance furniture, surrounded by powerful, predatory males in dinner jackets. Reminded me of all the parties to which I have never been invited (which is pretty much all parties), or what really must go on at all those jobs that won't hire me (which is pretty much all jobs). Or what Cleveland's Ingenuity Festival must be like (which is why I won't go; got to thank Mr. Kubrick for that, anyway).

The MPAA demanded that certain angles and split-seconds of nudity be trimmed from this bit, lest EYES WIDE SHUT be hit with the dreaded NC-17 rating the way SHOWGIRLS had been (personally I think Kubrick should have taken an NC-17; his movie definitely isn't for kids, and it's a classier flesh show that might have redeemed the rating somewhat. But I guess the studios were too hungry for the money).

From this, the second half of EYES WIDE SHUT takes on a desperate paranoia, as Dr. Harford tries to come to terms the consequences of that night, what really did or didn't happen, and whether he's gotten into something way over his head. Thanks to Kubrick's actors...talking...slowly...with...long...pauses-..in...between...words, there's a long slog until you get to the punchline which doesn't carry much of a payoff. The sex is much more anticipation and frustration that reality.

Cruise tries very hard, and sometimes his boyish looks convey a highly appropriate sense of being lost in a nightmare funhouse. But mostly his presence - opposite his gorgeous then-wife Kidman - seems to be a bit of "stunt casting" on Kubrick's part. Nice to know even Stanley Kubrick could have a weakness for that sort of thing. Probably if EYES WIDE SHUT had come out today, it would have starred Ben Affleck and Jennifer Garner instead.

For pure artful moodiness EYES WIDE SHUT is a long, strange journey all right. I guess someone could make a case now that it anticipates the current fascination with S&M courtesy of 50 Shades of Grey and its ongoing movie adaptations, plus the paganish secret-society angle made profitable by The Da Vinci Code.

And, on second thought, Stanley Kubrick would probably have been the only human being whose film adaptation of 50 Shades would have actually interested me. But as for EYES WIDE SHUT, if you go to see it, pack a lunch. And maybe a pillow. (2 3/4 out of 4 stars)