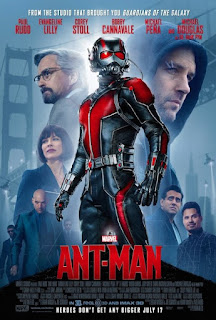 The Marvel Cinematic Universe has been around exactly as long as my son, well... two month longer than my son. The first Iron Man movie came out 2 months before his birth and it kickstarted a seemingly unstoppable film franchise. Together my son and I have discussed possibilities, great scenes and pure superhero joy; these films mean something to us. His first big movie experience was the first Avengers movie and he has seen every one of them in the theater since, and he has loved them... but with the exception of the non-stop pace and space adventure that is Guardians Of The Galaxy he has not had to sit through an origin story. Ant-Man is an origin story.

As my son and I walked out of the theater after seeing Ant-Man I asked him how he felt and he replied with 'I thought it was boring'. I was taken aback as I found the film to be another solid home run for Marvel. Then I realized why my 6 year old didn't love the movie like I did, there was not as much action as he is used to in these type of movies.

This is not to say there is no action in this superhero/heist movie –  there is plenty, including a great fight with a confused superhero. But it is much less when compared to Avengers: Age Of Ultron, Marvel's other big screen release this year.  And I, for one, could not be more pleased.

So let's dig in, what does this movie deliver and what does it mean in the overall MCU? Well first of all director Peyton Reed has crafted a film that was nowhere near the version of Ant-Man this long time fan expected, and the movie is better off for it. This film has reimagined the entire origin of Ant-Man while still paying tribute to the mythology that has come before, and it fits into the MCU perfectly while still standing on its own.  In the process of telling this alternate origin they use de-aging effects on Michael Douglas for flashbacks and it works perfectly. This is not that odd looking, weirdly digital look Jeff Bridges had in the last TRON movie, no sir, this effect has you believing you are seeing Douglas in his prime.

With that said, I should talk about the effects. They are, as usual, astounding. You will believe a man can shrink and the third act is almost non-stop whiz-bangery with flying and fighting and even an old timey, top of a train showdown. But the best effect for me was the 3D. I have been mostly unimpressed with the 3D in the MCU movies but this one used it to perfection. The shrinking and flying are top notch and I recommend you check this one out in 3D if you plan to see it.

The story is pretty simple. The bad guy, played by Corey Stoll, wants to use Hank Pym's (Douglas) shrinking formula and tech as a weapon and Pym needs to stop him. So he recruits a recently released from prison thief by the name of Scott Lang (Paul Rudd) to help him steal back his potentially dangerous property. Of course there are the obligatory training scenes as Scott prepares to be the Ant-Man. These are pretty standard origin story moments but this one gets a special appearance from an Avenger that allows for a great action beat as well as a touch of comedy.

Speaking of comedy, there are plenty of laughs in this film and very few seem forced or out of place thanks not only to the comic timing of Rudd but the supporting cast as well. Michael Pena, Judy Greer, T.I. and Garrett Morris all have moments to shine. Even every nerds dream girl, Evangeline Lilly, has a few funny moments when she isn't brooding and complaining.

The MCU is represented very well in this chapter as we get to see Howard Stark (John Slattery) and Peggy Carter (Hayley Atwell) interact with Pym as well as several MCU references including a nod to a certain wall crawler that will soon be arriving to the overall story. While we are on the subject of the connecting tissue in these movies, there is also a reveal to what could possibly be a big factor in Marvels upcoming Doctor Strange.  And don't forget to stick around for the credits, there are two additional  scenes included as a reward.

Despite my son not enjoying it as much as the other Marvel films, I found it to be among my favorites. I love how Marvel are toying with different genres of film. The last Captain America movie was a solid conspiracy, spy movie and this one is a solid heist movie all the way down to the team that assists in the crime. It was entertaining, fun and a perfect fit into what Marvel has been doing so far and I can't wait for Ant-Man to become a factor in the bigger picture. If you are a fan of these movies and this cinematic universe I could not recommend this movie any stronger. This is a rock solid 3 1/2 stars outta 4 .
Posted by Bob Ignizio at 9:10 PM