Angst (July 18th at midnight at the Capitol Theatre) 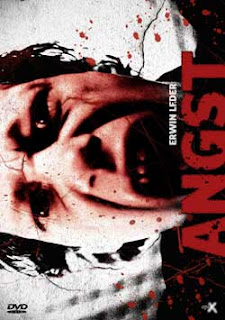 In the 1980s, American horror movies just wanted to have fun. Sure, Jason, Freddy, Michael, Chucky, and the like left dozens of dead teenagers in their wake, but the tone of the films always made it clear that viewers shouldn’t take the gory goings-on to seriously. These films weren’t meant to disturb viewers, but rather give them a cathartic experience. Such was most definitely not the case with Gerald Kargl’s 1983 Austrian shocker ANGST.

ANGST is presented from the point of view of its killer (Erwin Leder), a remorseless psychopath being released from prison after doing a 4 year stint for the attempted murder of his mother, followed by 10 years for killing an old woman shortly after his release. As he gets ready to head back out into the world again, he informs us through narration that, “that urge to torture a human, that’s one thing I could never get rid of.”

Indeed, as soon as he’s out of prison our unnamed protagonist starts looking for potential victims. After a few false starts, he finds himself at a secluded home that seems perfect for his needs, complete with a trio of potential victims.

The film makes no attempt to humanize or flesh out the people being terrorized. This isn’t about a resilient character somehow managing to survive and fight back against their attacker as the bodies pile up, and the intent is not to entertain, but to show what a real home invasion would be like in a cold, matter of fact fashion. It’s kind of like Michael Haneke’s FUNNY GAMES, only without that film’s self-satisfied winks to the audience, or HENRY: PORTRAIT OF A SERIAL KILLER without that film’s touches of pathos and black humor.

And yet ANGST is no mere feel-bad wallow in the darkness, either. It’s not an easy watch, and it goes without saying those who think movies should always be “fun” need not apply, but there’s real filmmaking skill at work here. Director/co-writer Gerald Kargl clearly had a definite vision of the film he wanted to make here, and with the help of co-writer/cinematographer Zbigniew Rybczyński he realizes it to bleak perfection. Leder is chillingly believable in the lead role, and the electronic soundtrack by Klaus Schulze adds to the film’s cold, industrial atmosphere. Evidently the events are based on a famous triple murder that took place in Austria in 1980, and the killer’s narration is drawn from statements made by several real life killers.

The film is a favorite of  controversial auteur Gaspar Noe, and one can definitely see its influence on him. As for Kargl, this film is his only feature to date. He financed it himself and went broke making it. He has since worked mainly on commercials and educational films. 4 out of 4 stars.
Posted by Bob Ignizio at 12:00 AM