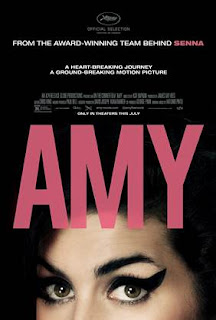 “A very old soul in a very young body” is how a record company executive described Amy Winehouse, whose weary, jazz-infused singing implied a woman of 65. not an 18-year-old north London Jewish girl. Winehouse was a prodigy who wanted, since she was a child, to sing like her idols, Dinah Washington and Billie Holiday, and to express her feelings with music. She was also a fairly talented poet, who turned her introspective verse into soul-searing songs. She didn't seek fame (“I don't think I'm going to be at all famous; I'd probably go mad,” she said in an interview with the London Observer), but she got famous anyway. And fame, as Asif Kapadia's documentary AMY demonstrates, killed her.


The film makes use of a surprisingly voluminous amount of archival footage of Winehouse, from her adolescent years, singing and having fun with girlfriends, through her short, tumultuous, paparazzi-plagued career, her struggles with drugs and alcohol, her toxic relationship with Blake Wood, and her sad, quiet death of alcohol poisoning at age 27.

Winehouse's troubles may have stemmed from childhood trauma. Always a willful girl, she began to act out when her father, Nick, left the family after years of neglect and infidelity. “When my parents separated,” Amy says, “I got tattoos, got pierced, used to bunk off school.” She was prescribed antidepressants, which made her feel “funny,” and took solace in music. “Her dream was to play in jazz clubs,” says her longtime pianist, Sam Beste. “She needed music as if it was a person. She would die for it.”


Amy is described by friends and associates as “a force of nature” who “could drink anyone under the table.” Her candor and lack of airs made her a refreshing presence on the music scene. “What I like about you is, you're so common” says a British television interviewer (perversely high praise in class-wracked England.) Her debut album, Frank, was a hit in the UK, and its follow-up, Back to Black, whose dark, painful songs were inspired by the breakup of her relationship with Wood, won five Grammy awards.


The meteoric success was accompanied by swarms of paparazzi and their incessant clicking and flashing (almost ridiculously exaggerated by the film's sound and visual effects), bulimia that left her alarmingly skinny, addictions to crack cocaine, heroin and alcohol accelerated by Blake Wood's reentry into her life. Blake and Amy married and sank more deeply into addiction, and by 2006, she was more famous for her drug problems than for her music. The film aims to restore Amy's reputation as a musician, a friend, a daughter, a granddaughter, and succeeds so well that it's jarring to hear Jay Leno and other comedians use her name as a punchline. It's a useful reminder that real people, with feelings and families, live behind those tabloid stories.


Amy's dad, Mitch, comes in for some blame (and self-blame) for his early neglect and his refusal to deliver his daughter to rehab when it might have made a difference. Her reggae-inflected song “Rehab,” which sounded punkily defiant at the time, seems in retrospect just sad. (“They tried to make me go to rehab but I said 'No, no, no....I ain't got the time and if my daddy thinks I'm fine....”) Mitch is also shown profiting from his daughter's fame, bringing a reality-TV camera crew to Amy's private island retreat. (Mitch Winehouse has denounced this film for portraying him “in a negative light.”)


Amy's decline was rapid and alarming. On an ill-advised tour near the end of her life, she walked out on stage and, completely disoriented, sat down and refused to sing. The media went wild.


Though somewhat defeated by excessive length, the film tells a sad story of a lively little girl who wanted to sing, got swept up in a world of pop-music fame and its glittering, dangerous allurements, and ended in an early grave. The footage of her funeral, with mourners in yarmulkes, brings the story back, startlingly, to the little Jewish girl from north London.


In one of the more touching scenes, Amy is in a recording studio with Tony Bennett, one of her musical idols, for a duet of “Body and Soul.” She is nervous and apologetic, and Bennett is warmly reassuring, effusively praising Amy's talent (in the same terms he now uses to praise singing partner Lady Gaga).. Had she lived, Amy might have been able to use her distinctive voice to sing jazz in small clubs, which, as this documentary has it, is all she ever really wanted to do. 3 1/2 out of 4 stars.
Posted by Pamela Zoslov at 1:03 AM