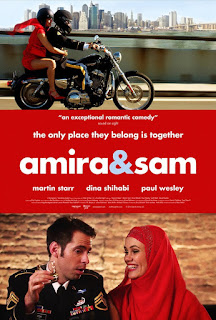 I had heard around the time that STOP LOSS came out that whenever a new screen drama about the Gulf War was trailered, audiences would boo and hiss the coming-attraction. Take that as yahoo Bush supporters tired of all the negativity about their great man, or take that as public distaste for the misconceived regime-change operation that was "Opertion Iraqi Freedom." But the point is, Gulf War movies, unless one makes a big exception for AMERICAN SNIPER, have largely been box-office as well as political poison.

Possibly explaining part of the low profile for AMIRA & SAM, a well-intended dramedy that is the debut of writer-director Sean Mullin, who is also a Gulf vet and injected a certain amount of autobiography. Fresh faces enhance Mullin's somewhat contrived opposites-attract picture, whose Islamic-cultural hook is also a hot-cold running gimmick.

Main character Sam (Martin Starr) is a returned Gulf War vet in New York City, where he works menial jobs and stubbornly refuses to claim a disability (the script alleges that claiming PTSD, whatever the truth, is the Standard Operating Procedure now for veterans). Sam declares that he's a perfectly okay ex-Marine; it's his country that's gone dysfunctional and crazy.

Sam - who moonlights as an aspiring stand-up comic - is more bemused than bitter at a society where his peers, who all talked big about going to fight after 9/11, stayed behind instead to become snotty, greedy mini-Wolves of Wall Street, selling junk bonds in the same skyscrapers where genuine war veteran Sam can only get to hired as janitor (hey, Sam/Sean Mullin, that sounds like a better deal job than I'm finding here in Cleveland).

Keeping a promise to an old Iraqi ally, Sam offers his apartment as refuge for Amira (Dina Shihabi), a sexy, liberal-minded, fiercely independent Muslim woman in danger of discovery/deportation by US immigration authorities because of her subsistence money-making scheme selling bootleg DVDs of pablum Hollywood movies on the streets (this actually pays tribute to 27 DRESSES, a sort of high point of mediocrity).

Having lost her father, a Coalition language translator in Iraq in the fight against Saddam, to American "friendly fire," Amira naturally hates Sam at first sight, despite his easygoing, accepting nature. But, after a montage of getting-to-know-you trips to Big Apple tourism draws (and a chaste, continuous-take bedroom scene that really is a fine piece of acting and directing) they fall for each other.

The twists run in various shades of predictability, as Sam does get hired - but with old pals in finance who only want to exploit his military background for their own gain (nice to see actor David Rasch, of TV's cult comedy Sledge Hammer, in a human-sized role as a Vietnam Marine). Amira, meanwhile, gets targeted for 9/11 anti-Arab bigotry (as much as I wish the writing here were sharper, I still find it credible that half of New Yoik/New Joisey persist in believing it was Iraqis who attacked us in 2001, rather than the Saudis who really did the deed).

The movie doesn't quite end on any firm note, and I seriously question how many virtually unemployed guys in NY happen to own a yacht. But, considering how many roles as "terrorist girl #4" effervescent newcomer actress Shihabi is going to have to field from now on, you might want to check out this okay little picture, flaws and all, just for its swimming against the currents.

The disc extras are particularly recommended, especially a short in which  Sean Mullin - who did indeed do stand-up prior to becoming a filmmaker - has his crew members take their own turns on amateur night behind a mic. I'd heard the James Cameron joke told before but nice to encounter it here anyway. (2 3/4 out of 4 stars)