[WHEN MARNIE WAS THERE opens in Cleveland on Friday June 5th exclusively at the Cedar Lee Theatre.] 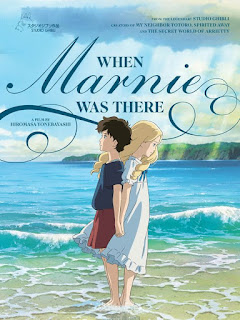 Sorry, a rush job on this review of a Japanese animated feature. Bob Ignizio, white foreign barbarian devil round-eye giant pale ghost (those are all bona fide racist slurs Japanese use against anglos, unless I'm much misinformed) dropped this one right on top of me, a review assignment of the latest release from legendary Nippon animation factory Studio Ghibli - right in between my binge-watch assignments to go through two other, more "conventional" anime shows.

So you can identify with my befuddled state, these were the bookends: Noir, a famous 2001 action serial (and, to my eyes, Sergio Leono tribute) about two winsome young girls working as a lethal international assassins-for-hire team, who are also puppets in the hands of a 1,000-year-old secret society. The other is Unlimited Psychic Squad, one of those sci-fi deals in which telepaths with incredible mind-superpowers duel like gods in a sort of alternate-history version of Japan.

Yes, in between those, I had to squeeze in the latest from Studio Ghibli. One of the few movie studios I can name whose very brand is fused with retired founder Hayao Miyazaki's sense of reverence for the natural world, gentleness, compassion, and the better side of humanity (even the Disney empire can't lay claim to that kind of mission anymore).

Watching the new Ghibli release WHEN MARNIE WAS THERE amidst all that other stuff, I felt like one of those starving guys from the Japanese POW camps in UNBROKEN who finally gets out and learns he can eat food again.

That is not to say that Studio Ghibli doesn't have its own cliches and recurring themes. Vulnerable and lonesome little girls, the loss of a parent (or two), the healing power of a slower-paced community, and being a child in an unfamiliar environment (usually the lush countryside). The timeworn syndrome that I do believe a better critic than myself called the "Dead Parent Society" propels WHEN MARNIE WAS THERE. Withdrawn adolescent Anna Sasaki, of the city of Sapporo, suffers from asthma and a crippling sense of abandonment since her parents died. Her foster mother sends Anna to a rural coastal town and jovial relatives, the Oiwas. When Mr. Oiwa points out local landmarks to the newcomer as being reputedly haunted, it's a foreshadowing of where this story is going.

Anna, whose only real interest in life is sketching, explores the area and becomes transfixed with a grand but forlorn empty mansion, the Marsh House, right on the water's edge. But is it abandoned? Anna is hailed by Marnie, a blonde girl in a somewhat antiquated costume, who claims to live in the house with a retinue of servants and her wealthy parents (who are always away on business).

But Marnie has a habit of vanishing suddenly. Anna returns and sees the once-empty house blazing with light and partygoers in evening clothes from nearly a century ago - but nobody else in town seems to notice. Despite such nagging details, Anna obsessively seeks the elusive Marnie out, for she considers the mystery girl her only real friend, and vice-versa. Even though Marnie won't leave the immediate vicinity of the Marsh House to visit.

You'd have to be thick as a plank not to realize that this is indeed ghostly business, albeit friend-ghostly business, ultimately suffused with loss and melancholy, not scares. It's rather hard to tell whether the Ghibli filmmakers and director Hiromasa Yonebayashi really expect their viewers to be like Anna, completely oblivious to Marnie's paranormal true nature and (obvious) surprise-ending tie to the heroine.

It likely doesn't matter. Ghibli movies have the knack for appealing both to the very young and eroding the jaded cynicism of adults such as myself, soul-deadened and scarred though we may be by the astronomical body counts of something like Noir. It's not an issue how predictable or secondhand WHEN MARNIE WAS THERE occasionally feels. Just let go and allow yourself to be soothed by the yarn, and don't get too worked up that the Disney release (with an English vocal-cast dub) harmless, gentle feature was slapped with a PG rating by the MPAA, so nobody would think it just "kidstuff."

WHEN MARNIE WAS THERE is based on a 1967 YA novel of UK origins, of which I must declare I was not previously acquainted. Which explains not very Japanese names such as "Anna" and "Marnie." Fortunately (or not, as the case may be) the Dead Parent Society speaks a language that crosses borders.

Okay, back to Unlimited Psychic Squad. I wonder if Hyoubu will blast somebody through a mountain in this episode. 3 out of 4 stars.