'The Working Dead' clock in at Horror Hotel in Hudson 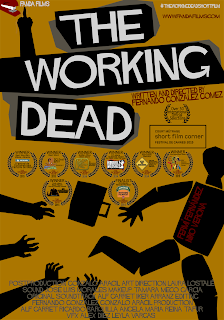 Fanda Films, presents ‘The working dead’, a bizarre social critic with a zombie flavour, winner of 7
awards as well as over 50 official selections.

An inconsequential seventies office filled with dull and grey workers. Suddenly, the president arrives and the annual report he has requested is not anywhere near ready. What could possibly be a better way to avoid a fight with the boss than to play dead? When all seems lost, rising again soon turns into the only hope. Long live the zombies!

This comedy has travelled halfway around the world due to its universal sense of humour. Even though it is set in Spain’s current precarious labour situation, it has  managed to surpass borders due to its unique vision of just how far society is  capable of degrading the human being in his misery to get a decent job. Marked  by the kitsch aesthetics prevalent in the seventies (executed by Laura Lostalé) and filmed in its entirety at the offices of Granalu, Segovia, Spain.

Apart from the usual director-actor duo formed by Fernando González and Niko Verona, we highlight the participation of known Spanish actors such as Fermí Fernández and Fernando Tielve, as well as an original soundtrack by Alf Garret and Iker Arranz, Fanda Films usual composers. Animation is  another of its strong suits as are its credits, created as a comic by Alex Díez
and Leyla Vargas, are a clear tribute to Saul Bass.