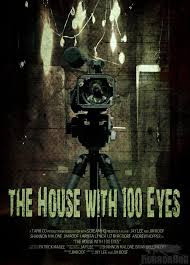 Want to watch something more painful than the last couple Cavaliers games? Okay, pointless question; the upcoming Indians and Browns games will contribute effectively to NE Ohio's unending agony (and then there's always the local economy for added knife twists). But for those of you masochists not interested in the variety of discomfort Cleveland sports, the 2013 torture-porn mockumentary HOUSE OF 100 EYES will do.

Filmmakers Jay Lee and actor/co-director/writer Jim Roof pull it off using that tiresome old BLAIR WITCH come-on that this is edited feature highlights of a mass of anonymous video material received via messenger. The conceit is that what you are watching was the ultimate project by husband-and-wife filmmakers and serial murderers Ed (Roof) and Susan (the pretty-in-a-scary-way Shannon Malone).
He's a longtime psychopath and pretentious filmmaker-type (same deal), while she's a former nurse. Together in a tightly locked house outfitted with dungeon rooms, they do "snuff" movies for the underground market on the seedy side of Los Angeles.

Ed says this latest production will be their greatest yet, a triple-murder on camera, assisted by a full complement of professional-level DVD extras and making-of featurettes. But, as in so many cinematic endeavors, the grandiose notions falter almost at the inception. There are "casting" difficulties as the couple troll parking lots and public places for potential victims. With phony  promises of a payout to make a sex video. the diabolical duo finally lure into their lair three LA young people - two runaway teen girls and a male wannabe musician.

Even so, one of the girls is unwilling and overweight, which sends Ed into a rage before he gets down to business of strapping her in a soundproof room and vivisecting her on camera. Left to her own devices with the other boy and girl, Susan tries to be just as sadistic - but Ed is bitterly disappointed at the quality of her work. In a climax of virtually real-time horror, things go rapidly downhill from there, personally and professionally, for the protagonists.

The movie does display flashes of dark humor, mainly in how the maniac Ed styles himself as a serious artiste - like so many other conceited filmmakers who expect way too much of themselves and their collaborators. Susan, meanwhile, warps between being an icy murderess to a cheerfully supportive, submissive housewife with a perverse religious streak. One can't fault performers Roof and Malone for lacking energy and presence.

But most of the time HOUSE WITH 100 EYES is mere unrelenting nastiness, though at 76 minutes it stays on the short side. Fans of the SAW series will approve the flowing blood and viscera.

Incidentally, our region is home to one Aaron `The Pudman' Milenski, not only a local musician but also an expert on the urban legend of "snuff" movies, and how the notion of homicide staged deliberately for filming purposes arose from tacky publicity surrounding an old grindhouse obscurity called THE SLAUGHTER. Aaron, at least last time I asked about ten years ago, is firm in his declaration that no "genuine" snuff movie has ever surfaced, even with incorporation of the legend into the plots of big-budget thrillers such as 8MM and MUTE WITNESS.

But I must ask, has Aaron ever considered Cleveland sports footage? (2 out of 4 stars)