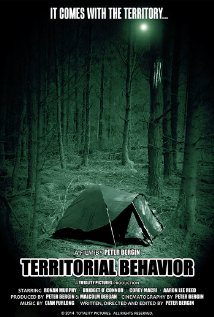 ‘Territorial Behavior’ is an independent feature film set in the unforgiving wilderness of North America, concerning American characters, though shot entirely in the wilds of Ireland with Irish and Canadian actors. The story centers on Bailey Rhodes, an outdoor survival instructor, who ventures into the wilds of Lolo National Forest in western Montana to make a promotional video for his survival training school. Things don’t exactly go to plan and Rhodes finds himself at odds with some poachers, who seem to have taken issue with his presence there. Worse, he soon realizes there may even be a more malevolent force than these crazed hunters, lurking out there in the wilderness…

With the storyline’s location being Lolo National Forest in the United States, Writer-producer-director Peter Bergin faced the challenge of creating this illusion using carefully selected shooting locations around Ireland. “Let’s face it: if you want to shoot an American-set story in a European country, Ireland is probably not at the top of the list,” Peter says. “Weather being a primary factor. So the challenge for us was picking convincing locations that when assembled like a mosaic, would create the illusion that you’re in the wilds of Montana. It wasn’t an easy deception to pull off, but I think we did it. And fortunately for us, an uncharacteristically good summer really helped too.”

Starring Dublin actor Ronan Murphy in the lead role of Bailey Rhodes, Bergin feels he has found a real talent with a bright future. “I always knew the first – and most important – element to convince us that this story was really in the US would be the actor playing the part of Bailey Rhodes,” Peter continues. “If the actor was not up to snuff, then it wouldn’t matter how great your locations were – the whole thing would still suffer and die a quick death. Fortunately, when you’ve got an actor with the talent and range of Ronan Murphy, everything pretty much slots easily into place like a finely tuned machine. Ronan did an effortless American accent and gave the role 150%, playing the role of Rhodes like a cross between a cowboy and a boy scout. When the film hopefully gets ‘out there’, I can see him going on to huge things in the future.”

Actor Ronan Murphy feels the entire process was an educational experience. “Territorial Behavior is my first feature film and something I’m really proud to be a part of,” he says. “I’ve learned a great deal not only about the film making process but also about myself during the shoot, which will stand to me in the future. Peter’s vision was ambitious and challenging from every aspect but I think we have created something that can reach a worldwide audience, which would be fantastic for a film made entirely in Ireland on a low budget.”

In addition to getting an ‘Honorary Mention Award’ at the Top Ten TV/Film section of the LA Neo Noir Film Festival and in Official Selection in the online LA Cine Fest, it is also in Official Selection at International Horror Hotel Film Festival, Ohio, where it won an award by coming second in their Suspense/Thriller category. The Sanford Film Festival said Territorial Behavior was an “Effective Found Footage film with Ireland very effective doubling as Montana. Ronan Murphy, portraying Bailey Rhodes, really pulls off the Survival-host.” Screennut.com said Territorial Behavior “Shows all the promise of being one of the greatest 'found footage' films of the modern age.”
Posted by Bob Ignizio at 12:00 AM