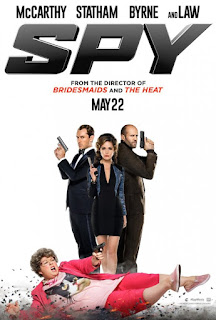 Four years ago, actress Melissa McCarthy and director Paul Feig worked together on the hugely successful comedy BRIDESMAIDS, a film that reestablished the female led Hollywood comedy. Then two years later, they teamed up again for THE HEAT - a weaker comedic effort in my estimation, though still popular among audiences. This year they bring us SPY, their third, and perhaps, strongest outing to date.

In SPY, Melissa McCarthy plays Susan Cooper, a CIA analyst. Sitting behind a computer, Cooper serves as the eyes and ears for the CIA’s leading spy, Bradley Fine (Judd Law). Fine, whose last name serves up a great deal of puns, is a James Bond-type figure. Cooper, who is self-degrading and aware of the physical differences between herself and Agent Fine, is head over heels for him. When Fine’s European mission to prevent a nuclear weapon from ending up in the wrong hands goes off the rails, Cooper volunteers to go overseas as an unexpected agent.


When a real CIA agent, Rick Ford (Jason Statham), finds out the CIA is considering sending someone like Cooper, a nobody in his eyes, he quits the CIA and heads out on his own to take care of the nuclear threat.

In Europe, Cooper is seeking out Rayna Boyanov (Rose Byrne), a player in the global terrorist ring, and the key figure in the plot to sell the nuclear weapon. Despite sharing the goal of bringing Boyanov down, Cooper and Agent Ford continuously run into each other and in the process, put the mission at risk.

Along the way, Cooper experiences double-agents, car chases, epic fights, and the complications of staying under cover. What makes SPY so interesting is that it may be the subtlest, yet funniest McCarthy has ever been.

McCarthy’s softer side has always seemed to play better on the screen; last year's ST. VINCENT was proof of that. In films such as IDENTITY THIEF, THE HEAT and TAMMY, McCarthy plays up the unlikable qualities in her characters with less success. SPY gives us a glimpse of McCarthy reigned in as a character. At the same, time she is totally unleashed with funny dialogue and an intriguing story supporting her. In that balance, SPY allows McCarthy to reach her full potential.

While McCarhy shines, let there be no mistake, Jason Statham absolutely steals the show. SPY is a fun film, and when it was over I almost felt guilty for wishing it had been a movie exclusively about his hilariously over the top character. Statham, as Rick Ford, is a high intensity, low IQ, overly cocky, bumbling agent - and it’s terrific.

The film also sees a quality comedic performance from Peter Serafinowicz (GUARDIANS OF THE GALAXY), who plays Aldo, a secret agent in Europe that the CIA uses to help protect Cooper. His libido is off the charts and he is constantly hitting on Cooper. The conflict serves up some of the biggest laughs of the film.

SPY’s greatest strength is having so many characters that are consistently funny within the realm of the story. Feig and his buddy Judd Apatow (both of which helped create the iconic "Freaks and Geeks" series) have made films that often feel highly improvised. SPY avoids this, and it feels so much stronger for it. Everyone is serving the story while providing plenty of laughs throughout.

Small complaints about overly-long car chases and action scenes, or a stale cameo, can be made. And the premise is clichéd (oddball ends up being a good spy). However, these issues never prevent SPY from being what it is: a wacky, good time. 3 ½ out of 4 stars.
Posted by Joseph Anthony at 12:01 AM