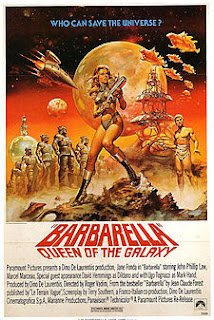 Jane Fonda may have given better performances in better films than BARBARELLA, but none are as iconic as her portrayal of the sexy sci-fi super heroine. And yet upon its initial release, BARBARELLA failed to resonate with audiences and critics alike. Over the years, however, it's become a bonafide cult classic.

The film opens with Barbarella (Jane Fonda) cavorting weightlessly in her spaceship, removing her stylish space suit one piece at a time while the kitschy lounge theme song plays in the background. She's been sent on a mission to find Durand Durand (Claude Dauphin), a rouge scientist who has invented a dangerous weapon in an era when earth has forsaken such things in favor of peace.


As silly as much of BARBARELLA is, it's not completely devoid of substance. The film is clearly mean to poke fun at the “free love/if it feels good, do it” ethos of the times. Sexual intercourse in this future world is given all the consideration of a hand shake. It's so causal that it's performed fully clothed with a pill doing all the hard work. Only savages do it “the old fashioned way”, although Barbarella soon learns the old ways are sometimes best. And yet as much as the movie makes of its star's sex appeal, which is arguably it's greatest selling point, it's not carnality but pure blind love as represented by the angel Pygar (John Phillip Law) that ultimately wins the day over the evil Queen (Anita Pallenberg).

Despite being set in the year “40,000”, there is precious little in BARBARELLA that looks towards the future. This is a movie of its time through and through. The term “dated” would not be unfair to use. That's fine, though. The 1968 Dino DeLaurentis produced comic book adaptation was intended as lightweight, campy fun on its initial release, and the passing of time has only accentuated that, securing BARBARELLA's place in movie history as one of the more entertaining sixties pop art relics. 3 out of 4 stars.
Posted by Bob Ignizio at 12:13 AM