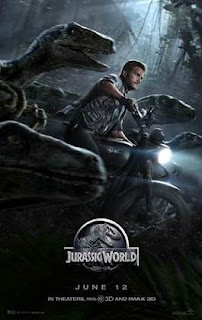 The first time we see Jurassic World - an upscale corporate hellscape complete with chain restaurants and tacky bars (Clevelanders, imagine Crocker Park with the odd Stegosaur lumbering past Abercrombie) - is in a soaring pan over with John Williams' iconic clarion score blaring. Is this trenchant irony or is everyone involved in JURASSIC WORLD (the fourth film in the Jurassic Park series) just that oblivious to what made its precursor trumpet-worthy?

For a movie that devotes so much of its early runtime to (overly) pointed conversations about the increasing public demand for sensational spectacle and ante-upping (ahem) sequels to familiar animals, it's more than a little disappointing how quickly director Colin Trevorrow's (SAFETY NOT GUARANTEED) film divests itself of satirical potential in exchange for an extended, lukewarm nostalgia bath. But at least there are plenty of mindlessly engaging bath toys

It's only about a quarter hour into the 130-minute film that genetically engineered super dinosaur Indominus Rex clever-girls its way out of captivity and into the tourist-filled park, which was constructed on the remains of John Hammond's original whoopsie-doodle.

Luckily, Navy vet, raptor trainer, and Claire's one-time suitor Owen Grady (Chris Pratt) is more than willing get his Quint on, hunt the monster, and save the kids.

Yup. Raptor trainer. Based on the trailer alone, the usually level-headed internet really laid into this plot point. But having actually, you know, seen the movie, listen: this is probably the best executed - and certainly the most original-to-the-franchise - storyline JURASSIC WORLD has going for it. (Forget Owen's profession - the real bummer is his general action hero blandness, especially given the extreme affability and energy of the actor portraying him.)

Pratt plays Owen as believably invested in his predatory charges, serving as the surrogate leader of their hunting pack rather than a whip-coiling showman. The Jurassic Park series is founded upon humanity's fraught relationship with the natural world - the force we exert in order to thrive versus the respect we afford in order to survive. Owen and his cartoonishly aggressive foil, InGen security head Vic Hoskins (Vincent D'Onofrio), make short work of these themes, wrapping them all in a silly military-industrial complex story and some pretty rockin' dude/raptor tag-team action.

And, of course, Dinosaurs! Old stalwarts return, and new beasties arrive. As in the other two sequels, none of the largely computer generated dino visuals come close to Spielberg's lovingly rendered and constructed originals... but they're no worse than most Summer Blockbusters, save for an ultra sludgy climactic royal rumble that has all the grand realism of the latest SyFy mecha-whatever versus spider-horse. (Note: I did see this film in 3-D, i.e., one more dimension than necessary.)

Despite some goofy b-movie bluster about hidden traits from classified DNA modification experiments, JURASSIC WORLD's newest neo-prehistoric antagonist - the Indominus Rex - is more or less your standard John Q Carnivore. Like the Spinosaurus in JURASSIC PARK III, a lot of energy is invested making this dinosaur look, like, totally crazier than the other dinosaurs, but in practice, he's just your solid, workaday killing machine.

I will say: what the pteranodons lack in individual physical scale, they make up for in sheer swarmability, making their escape and ensuing rampage one of the film's most gleefully chaotic sequences.

With a fully operational park, a completely fresh set of characters, and a just-hokey-enough sci-fi premise, JURASSIC WORLD could work... were it not for its concerted insistence on duplicating the original film, setpiece after setpiece, in a flurry of clunky homages that quickly turn from obvious winks into strident, one-eyed plagiarism.

Trevorrow's more blatant nods to the original JURASSIC PARK go down easy: we get Mr. DNA, some Hammond-era architecture, a familiar vehicle, and even some vintage no-expenses-spared night-vision goggles - All quick beats that don't disrupt the storytelling or co-opt the action.

But a couple young kids trapped in a tour ride as it's brutally Eskimo kissed by a towering carnivore... two adults drinking in the majesty and scale of prehistoric life as they commune over an ailing dinosaur... a fleet-footed foe pursuing a speeding, open vehicle with potential victims stowed in the back... hell, not to spoil anything, but a heroically implemented road flare and the palatial visitor's center lobby... each provide pivotal action sequences.

For this viewer, it became endlessly frustrating to watch scene after scene revert backwards into ham-fisted tributes to an older, better film, especially considering that what little social commentary JURASSIC WORLD had the potential to offer is swiftly undercut by these baser impulses.


JURASSIC WORLD's story contends that humans have such short attention spans and stingy senses of wonderment that normal old dinosaurs would get boring after a couple of years, necessitating the creation of monstrous, genetically engineered super dinosaurs in order to keep the deep-pocketed mouth-breathers enthralled. JURASSIC WORLD's filmmakers, on the other hand, seem to contend that humans exhibit such loyalty to formula and fear of new ideas that a truly original, incisive Jurassic Park sequel would be the true monster. (2 1/2 out of 4 Stars)
Posted by Matt Finley at 12:01 AM