The world premiere for Horror Society's most anticipated film of 2015 will be held at Sandusky State Theater in Sandusky, Ohio, just 20 minutes from the location of the most popular urban legend in the state of Ohio, on July 11th with events on the 10th and 11th.
[Press Release from the filmmakers.] 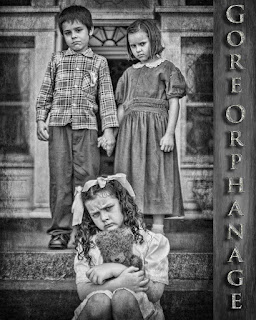 The premiere will be attended by Maria Olsen, Emma Leigh Smith, Sandusky's own Miss America Jackie Mayer (whose son Bill Townsend stars in the film) and the film's stunt coordinator "The Franchise" Shane Douglas.  Also in attendance will be the Director Emily Lapisardi and her husband Executive Producer Cody Knotts.

The film is a female-centered horror story directed by Emily Lapisardi in her directorial debut.  Filmed in 2014 in Scottdale, PA, the story is set in the 1930's and follows the life of Nellie, an orphan, who is brought to Gore Orphanage and discovers quickly that some things are worse than losing your family.

This is the fifth film produced by veteran independent producer Cody Knotts (Pro Wrestlers vs Zombies) and was filmed in Scottdale, PA with a cast of over 20 local children in addition to the actors listed above.   Knotts has worked with such horror icons as Doug Bradley and "Rowdy" Roddy Piper in the past.

The film was a husband and wife collaboration of Mr. Knotts and Ms. Lapisardi.  Mr. Knotts wrote the film to impress his then fiancée, who was inspired by a road sign in Ohio during travel for Knotts' film Pro Wrestlers vs. Zombies.

The trailer is located at https://www.youtube.com/watch?v=KiidGRHD-CU.
Posted by Bob Ignizio at 12:00 AM