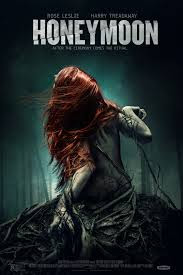 On late-night radio I heard a movie reviewer in a much higher pay grade and Amazon book-sales rank than mine really sing the praises of director Leigh Janiak's debut HONEYMOON, as an absolute classic. The run-out-and-grab-someone-by-the-lapels-and-drag-them-to-see-it undiscovered gem of the moment.

Well, much as I have also triumphed unheralded genre works as unsung masterworks (BLOODFIST III: FORCED TO FIGHT is a classic - and the Phantom of the Movies agrees with me on that one), I have to confess that HONEYMOON left me with a little bit of a lackluster feeling by the end. Mind you, all props to Janiak for evoking a memorable sense of unease, until a disappointingly cliched payoff (not unlike many honeymoons themselves, I might add).

Minimalist premise has Bea (Rose Leslie) and Paul (Harry Treadaway), newly married, arriving in the bride's family's lakeside-getaway cabin in rural New York State for an isolated honeymoon idyll. It's an environment in which the outdoorsy Bea is far more at home than tenderfoot Paul.

After an unexpected encounter with Bea's surly ex-flame (and his forebodingly fearful wife), Paul notices his bride's behavior becoming erratic and strange. He catches Bea allegedly "sleepwalking" in the woods at night, finds strange wounds on her inner thighs, and discovers her nightgown in the brush, covered with a sticky substance.

Someone seems to be shining a light in their windows at night. And unstable Bea, obsessively journaling now, has hidden Paul's car key somewhere. How well does he really know his new wife after all?

What feels like a psychothriller of sexual betrayal and females-gone-crazy turns into the paranormal. [SPOILER ALERT] Let's just say Whitley Strieber and  TV's The X Files warned us all what happens in these remote cabins at night. The ufological explanation for the creepy stuff is something of a letdown, even though Janiak resists indulging in CGI monsters and real gore when mere suggestion (especially gynecological phobias) can suffice.

Those of you still into reading, know that for much the same unease, of sudden discomfort, fear and dread of an intimate partner's unimagined dark side (and you stupid gays demanding to have the right to be married, YOU ARE NOT EXEMPT!), Ray Bradbury did a similar thing, in just a few vivid pages, in his short story "Gotcha!" And he didn't have to bring space aliens into the picture either, not even Martians. (2 3/4 out of 4 stars)