Eastern Boys (June 24th at the Cleveland Museum of Art) 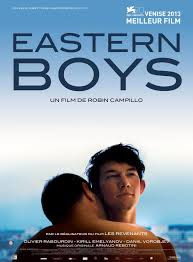 It's been a recurring complaint of mine that I get assigned an inordinate amount of gay-themed movies to watch. More than my share, I do believe. I've long complained about it elsewhere; no need to go into gory details here.

But just know that if any paying media outlet had actually, after this long, long, "Cleveland Rising" (yeah, right; not for me) employment drought, genuinely, truly rehired me and told me my first assignment was to see JURASSIC WORLD, I'd probably freak out. Like so:

"You can't fool me! It's another GAY movie! There it is, right in the title! The word `ass!' The real name is probably YOUR ASS IS MY WORLD and the marketing people at Universal just misheard it. And presumed there were dinosaurs in the plot. It's really one of those BROKEBACK MOUNTAIN type man-on-man romances: "Your ass is my world," yes, probably taken directly from the dialogue. I can hear that becoming the catchphrase when this winds up a Best Picture nominee, the gold statuette personally handed over by Neil Patrick Harris and Jodie Foster. I need a break from the damn gay movies!..."

Well, I didn't get rehired anywhere, didn't get to see JURASSIC WORLD. I did, however, make a few bucks seeing the French film EASTERN BOYS. To paraphrase Ellen Degeneres, yep, it's gay.


Robin Camillo's drama is a subdued piece set in polyglot modern Paris. The Gare du Nord railway terminal, a major crossroads for the entire country, is where a gang of rather thuggish guys, "undocumented" migrants from the former Warsaw Pact nations gather and run various scams. One of their younger affiliates Marek, AKA Rouslan (Kirill Emelyanov), is a Ukrainian war refugee turned male prostitute. Daniel (Olivier Rabourdin), a middle-aged, affluent Paris homosexual, makes a rendez-vous date with Marek - and is robbed and bullied by the rest of the gang, who stage an informal party in his high-rise while looting his possessions.

Remarkably, even after this humiliation (note to gays; being married is just like that, you fools) Daniel continues his love affair with the Ukrainian boy. He teaches Marek to speak French and allows the kid to move in with him in his flat. The rest of the gang does not approve the arrangement, especially their Russian "boss."

Still, as the relationship starts to widen and consume innocent bystanders in the Paris immigrant community, the filmmaker's concerned eye for the have-nots and outsiders in society becomes terribly clear, and in this sense the film transcends its gay-specialty market roots. Parts of this movie even reminded me of Karel Reisz' excruciatingly suspenseful Holocaust tragedy THE SHOP AROUND THE CORNER, and that is praise indeed.

The ending is a little ambiguous, and perhaps deliberately messy and non-audience-focus-grouped. But it says something that I wasn't ready for this 128-minute tale (divided into four chapters) to wrap up. Which is also saying a lot, especially for a gay romance where a gayed-overdosed critic such as myself is concerned. (3 1/4 out of 4 stars).