[DER SAMURAI will be released on DVD, Blu Ray, and VOD on June 9th by Artsploitation Films.] 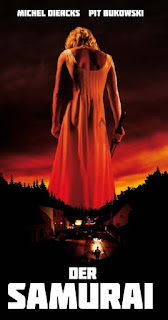 Although billed as a horror film, that seems too limiting a label to put on DER SAMURAI. In the film, Jakob (Michel Diercks) is a young police officer charged with capturing a wolf that has been terrorizing the locals. But instead of trying to kill the beast for which he has obvious sympathy, he opts to feed it deep in the woods, hoping that will keep it away. Because of his sensitivity and perceived weakness, Jakob is disrespected and tormented by his peers, who all but call him “faggot” as they mock him.

Things get strange when a package addressed to “the lonely wolf” shows up at Jakob's address. He takes it into the woods where he finds, instead of a wolf, a transvestite wearing a dress (Pit Bukowski). The transvestite takes the package, which turns out to contain a samurai sword, and sets off on a spree of mayhem and murder. Jakob realizes he has to stop this madman, but does he have what it takes? Perhaps more importantly, does he see something of himself in this gender bending figure? Both actors turn in first rate performances that really bring out the connections between their characters.

It's obvious that one isn't meant to take DER SAMURAI too literally. There's a “fairy tale” tone what with the “big bad wolf” figure (who even poses a threat to Jakob's grandmother), and you don't have to be Freud to realize the film is more about Jakob's sexual repression than the “cop chases a killer” story on its surface. Of course the surface story works just fine, too, but in this case, the subtext really is the text. The imagery and themes are compelling, and while the film deals specifically with issues of gender and sexuality, it's not hard for anyone who has ever felt like an outsider to relate to Jakob, or to feel a degree of admiration mixed in with the horror as “The Lonely Wolf” dispatches the small-minded denizens of Jakob's village in an orgy of stylized violence.

German filmmaker Till Kleinert has honed his skills with a number of shorts this reviewer has not seen, with DER SAMURAI marking his feature debut. It's an impressively assured film that delivers a fully realized vision seemingly without wasting a single frame. Fans of late seventies/early eighties Euro horror stylists like Dario Argento will certainly appreciate both the film's visual style and its lack of squeamishness when it comes to depicting onscreen carnage, while the symbolism and social commentary should please devotees of arthouse eccentrics like David Lynch and Alejandro Jodorowsky. It's unfortunate that such a fine debut has, with the exception of a few festival showings, been sent straight to video, but such is the state of affairs for challenging films that don't fit into neat, easily marketed boxes these days. 3 ½ out of 4 stars.
Posted by Bob Ignizio at 12:00 AM