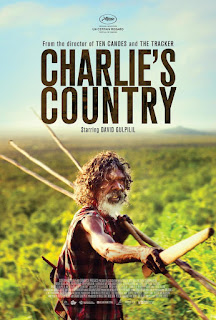 While it’s fair to say that the United States has done a lot of awful things to the Native American population, we’ve got nothing on Australia when it comes to shoddy treatment of indigenous people. Just how shoddy that treatment can be is at the heart of CHARLIE’S COUNTRY, a fine new drama from writer/director Rolf de Heer.

The film is co-written by David Gulpilil, probably the only Aboriginal actor the average movie goer might recognize from his roles in WALKABOUT, CROCODILE DUNDEE, and RABBIT PROOF FENCE. Here he plays Charlie, and aging Aboriginal man longing for a return to the old days and old ways of his people. Once long ago he performed a tribal folk dance for Queen Elizabeth at the opening of the Sydney Opera House, a fading glory he clings to as he does whatever he can to get by.

Occasionally Charlie helps out the white police officers stationed on what used to be his land (as long as it doesn’t mean getting any of his own people in trouble). Not only do they not pay him for his help, they confiscate Charlie’s gun when he and a friend are hunting because they don’t have licenses. The last straw is when the spear Charlie carves himself gets taken as well. Having reached his limit, Charlie heads out into the bush to try and live on his own. That sets in motion a series of events that sends Charlie to the hospital, and eventually, to jail.

More character study than story, CHARLIE’S COUNTRY can be a bit meandering at times, but never to the point of becoming dull or unfocused.  There isn’t a lot of camera movement in de Heer’s direction, but there’s usually a lot of detail to take in with the film’s largely static shots, whether out in the bush or just hanging around Charlie’s run-down village.

The film presents a full portrait of an interesting character, brought to life with warmth, dignity, and humor by Gulpilil.  It doesn’t shy away from showing Charlie’s less laudable traits, but that doesn’t lessen the impact of his righteous anger over the treatment he and his people suffer under these colonialist “white bastards”. 3 out of 4 stars.
Posted by Bob Ignizio at 12:00 AM