[‘The Making of Major League’ by Jonathan Knight is now available from Gray & Company Publishers.] 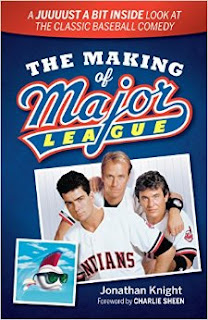 It’s almost impossible to make a cult movie intentionally. Certainly filmmaker David Ward wasn’t thinking in those terms when he wrote the screenplay for MAJOR LEAGUE, the baseball comedy in which a particularly ragtag Cleveland Indians team manages to pull together to have a winning season, which when the film was released in 1989 was an idea still firmly rooted in the world of fantasy. Made for a modest budget of $11 million, the film was a hit. But more than its initial box office success, MAJOR LEAGUE would go on to become one of those aforementioned cult movies, the kind of movie watched over and over again by fans who have memorized every line of dialogue.

As you might surmise from its tile, ‘The Making of Major League’ by sports writer Jonathan Knight recounts how its subject came into being, as well as its impact on those involved and the wider culture as a whole. It’s about as exhaustive a tome on the subject as anyone could want. Everyone involved with the film from writer/director Ward to the cast to members of the Indians front office is interviewed about their particular involvement, with Knight assembling their stories into a fun, breezy narrative.

Knight’s sports background certainly helps in analyzing how closely the film hews to the game it depicts (quite well, as it turns out) and in pointing out the historical figures who provided inspiration for aspects of some of the main characters.

About the only quibble I have with Knight’s text is an assertion that underdog movies of this sort had been in short supply throughout the seventies and early eighties. I don’t know, aside from the ROCKY and BAD NEWS BEAR films Knight mentions, the era also gave us BREAKING AWAY, THE KARATE KID series, and all those “slobs vs. snobs” movies like ANIMAL HOUSE, REVENGE OF THE NERDS, and Rodney Dangerfield’s entire career. Seems like a fair amount to me. But if that’s the worst I can say about the book, and it is, then frankly I’m just nitpicking because, well, I’m a critic and that’s what we do. 4 out of 4 stars.
Posted by Bob Ignizio at 12:00 AM