7 Minutes (opens in Cleveland June 26th at the Capitol Theatre)


[7 MINUTES opens in Cleveland on Friday June 26th exclusively at the Capitol Theatre.] 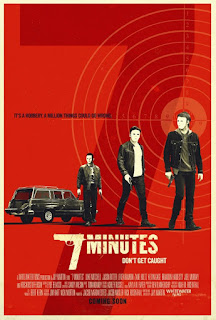 Redbox, Netflix, and the shelves of what video stores still remain in this world boast no shortage of low budget thrillers and crime films. And as long as one goes in with low expectations, such works can be reasonably entertaining time killers, good for a weekend get together with a few friends and the intoxicant of your choice. Occasionally you’ll even stumble across a sleeper that deserved better than straight to video obscurity. But instead of one of those rare gems getting a theatrical release, for some reason that honor has been bestowed upon 7 MINUTES.

7 MINUTES concerns a group of amateur drug dealers who dump their stock out of paranoia when it looks as if the cops are on to them. This of course does not sit well with their supplier, who gives them two days to come up with the money. The obvious answer, of course, is to pull a robbery.  It should be an easy in-and-out job that, as the title suggests, should take a mere 7 minutes. Of course everything that can go wrong does, and the simple heist turns into a bloodbath.

Like RESERVOIR DOGS (or Kubrick’s THE KILLING, if you prefer), 7 MINUTES jumps around in time. You usually know when that’s about to happen because the film freeze-frames and flashes a character’s name onscreen before rewinding to focus on their backstory. Other than reminding viewers of other, better films, the device adds very little.

On a strictly technical level, 7 MINUTES is fine. I’m sure the budget was relatively low, but nothing about the end product feels cheap or shoddy. The cast, consisting mostly of young up and comers like Luke Mitchell (“Agents of S.H.I.E.L.D.”) and Jason Ritter (“Parenthood”), are all decent performers. Unfortunately, although writer/director Jay Martin proves he knows his way around a camera, he’s far too enamored of Quentin Tarantino and Guy Ritchie for his film to be anything more than an uninspired attempt to emulate his heroes. He manages a reasonable facsimile of the two filmmakers themes and styles, but fails to conjure up anything resembling the energy and fun of a DOGS or SNATCH. All that leaves is a dreary “been there, done that” feeling and a by-the-numbers plot that constantly draws attention to its own clunkiness and implausibility.  2 out of 4 stars.
Posted by Bob Ignizio at 12:00 AM