[WELCOME TO ME opens in Cleveland on Friday May 8th exclusively at the Capitol Theatre.] 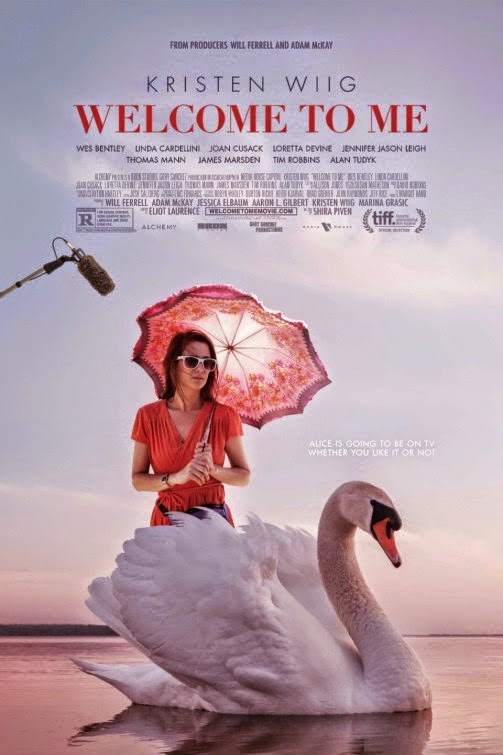 Allison (Kristen Wiig), a woman suffering from borderline personality disorder, wins the lottery, goes off her meds, and buys up airtime on a cable network to star in her own TV show in WELCOME TO ME. The concept of the show is that Allison will ride into the studio audience on a giant swan and then proceed to talk about herself, make low glycemic recipes like a meatloaf cake with sweet potato icing, and stage reenactments of various perceived injustices from her past so that she can call out those who did her wrong. As her program inexplicably grows in popularity, Allison, a former veterinary nurse, adds a segment in which she performs dog neutering for audience members as well.

Others who are in Allison's orbit include long time best friend Regina (Linda Cardellini), her psychiatrist (Tim Robbins), and the crew of her show: producers/brothers Gabe and Rich Ruskin (Wes Bentley and James Marsden, respectively), director Dawn (Joan Cusack), and production assistant Deb (Jeniffer Jason Leigh). Perhaps as befits a film about someone who only cares about themselves, none of these secondary characters are particularly fleshed out. They exist only to facilitate Allison's plans and then act aghast to varying degrees at her behavior both on and off camera.

Tonally WELCOME TO ME is all over the place. At times it aims to be a comedic character study, at others it wants to be a satire of celebrity and the media. Then it shifts gears to try and be a sensitive portrait of someone dealing with mental illness, only to go back to looking for attention through laughs again. None of it works.

Bad films aren't always ineptly made howlers fit for “Mystery Science Theater 3000”. WELCOME TO ME is competently made, and Wiig creates a complex and bizarre character. But Allison is too tragic for us to laugh at, and too unpleasant for us to laugh with. There's a great supporting cast, too, but they're wasted in a shapeless narrative that seems to move forward only grudgingly in a pointless slog that offers few pleasures and even fewer insights on its subject. 2 out of 4 stars.