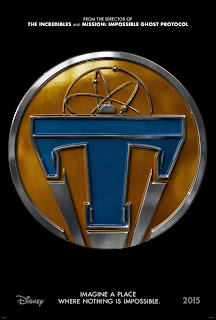 There's a climactic moment in TOMMORROWLAND, Brad Bird's (RATATOUILLE) latest live-action Disney adventure, in which characters discuss the possibility of "zapping an idea" into someone's mind. It's a beguiling notion, especially for a film that's otherwise content to transmit it's themes via sledgehammer.

Given the ponderous shroud of secrecy draped over the film by the house of mouse, I went in with only one solid expectation: Fun. Bird's past features THE IRON GIANT and THE INCREDIBLES are among my favorite animated films of all time, and both demonstrate the director's ability to create smart, heartfelt, visually audacious science fiction. While TOMORROWLAND is certainly a thoughtful, ambitious, and occasionally thrilling project, it never realizes the joyful promise - and graceful simplicity - of retro-futuristic skyscrapers glittering against an open sky.

The film's Disneyland-referencing titular metropolis is a high-tech utopia built by a collective of earth's top scientists and artists in a parallel dimension. After a brief '60s-set prologue in which precocious boy inventor/larval George Clooney, Frank Walker (Thomas Robinson), makes a brief, exciting jet pack-enhanced circuit of the city's robotic wonders and aerial colonnades, we're cast back into our janky ol' present-day universe for a lurching majority of the film.

If Bird and co-writer Damon Lindelof (PROMETHEUS) left it at that, and used the pre-fab adventure story template as the boundary walls for  a menagerie of zipping, whizzing futuristic toys inside a massive sci-fi sandbox, the movie could have been the spectacle-driven field trip to the retro future I was poised to enjoy.

Instead, the pair tug TOMORROWLAND into conceptual quicksand, launching a puffy, preachy screed against fatalism.

Before a background littered with images of atomic bombs, civil unrest and ads for post-apocalyptic movies and video games, Casey's father, her teachers, her new buddy Frank and his nemesis Nix all have a lot to say about the downward trajectory of society. Ultimately, humanity's alleged shrugging acceptance of global warming, its will to political violence and (let's not forget) its pop cultural fascination with end of the world scenarios are all invoked as enemies of the forward-looking ethos that led to the creation and stewardship of Tomorrowland.

Can Casey's optimism, creativity and will to catalyze change provide salvation? (suspense noise)

When Bird manages to free himself from the lofty aspirations of the screenplay, he turns in some gleefully cartoonish action. The film's best sequence feels like HOME ALONE by way of the Jetsons as a platoon of Nix's replicant security forces invade Frank Walker's home, forcing Frank and Casey to tear through the house activating a series of fiendish devices that crush, burn and otherwise violently dismantle their foes.

Bird's choice to make the enemy robots externally identical to humans comes with a bit of a trade off - it makes the immediate visual design of the film a bit duller, but also allows for action sequences that feel darker and much more intense than they would if the wind-scattered limbs, heads, and torsos weren't recognizably human.

While scenes like the house escape and  an epic fight sequence that, though dogged by some dodgy, inexplicable science, combines two types of robots, a trans-dimensional portal and advanced particle physics, highlight Bird's ability to create grounded, effortlessly watchable action out of high-concept, fictions, TOMORROWLAND is far too light on this type of straight-up fun

Clooney's smirking affability, Raffey Cassidy's bone-dry British 'tude, and some occasionally inspired slapstick save the film from ever seeming leaden, but the proceedings never feel  inspired or wholly original - a crushing disappointment for a movie that's message is (however tenuously) rooted in themes of innovation and creativity.

Worst of all, I left feeling as though I still had no familiarity with Tomorrowland as either a physical landmark or an ideological gambit.

Part of this probably stems from Lost-vet Lindelof's "Don't Tell, Don't Show Either" writing philosophy that ensures we don't ever know the who, how and when surrounding Tommorowland's construction (even the why is kinda just, "because it's cool...").Mostly, though, there's just plum too little time spent inside the city and among its supposed marvels.


Look - TOMORROWLAND is, first and foremost, a movie for kids, and kids probably won't feel nearly as chewed out as I did by the finger-pointing, too-topical monologues about the inaction that pessimism begets. Maybe it'll even bludgeon some inspiration into their minds. But it's gonna have to hold their attention long enough to swing its hammer. That could be a problem. (2 out of 4 Stars)
Posted by Matt Finley at 12:01 AM