The Voices (May 7th and 8th at the Cleveland Cinematheque)

[THE VOICES screens Thursday May 7th at 8:50 pm and Friday May 8th at 7:30 pm at the Cleveland Cinematheque.] 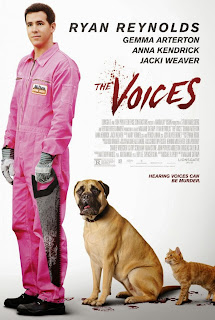 Most people talk to their pets and no one thinks much of it. It's only when the pets start to talk back that this we need to worry. And Jerry (Ryan Reynolds) is definitely someone to worry about in Marjane Satrapi's THE VOICES.

As you might suspect from someone who believes his cat Mr. Whskers and dog Bosco (both voiced by Reynolds) are talking to him, Jerry is mentally ill. He's seeing a court appointed psychiatrist (Jacki Weaver), but Jerry isn't following his doctor's orders to stay on his meds. While staying medication-free has the benefit of making the world a much more happy and brightly colored place for Jerry, on the downside it casts his pets in the roles of the classic angel and devil on his shoulders (Mr. Whiskers being the devil, Bosco the angel).

Despite his issues, Jerry not only does reasonably well at work, he also works up the nerve to ask out Fiona (Gemma Arterton), one of the girls in accounting. Fiona isn't interested in Jerry and only says yes intending to ditch the poor guy. But fate brings the two together when Fiona's car won't start and Jerry winds up giving her a ride home.

On the way to Fiona's house,, an errant deer smashes through Jerry's windshield. When Jerry slits the animal's throat, Fiona freaks out and takes off running. Jerry runs after Fiona and accidentally winds up killing her. Things just escalate from there, especially when Lisa (Anna Kendrick), another one of the accounting girls, strikes up a genuine relationship with Jerry.

Satrapi, a comics writer and artist who co-directed adaptations of her graphic novels PERSEPOLIS and CHICKEN WITH PLUMS with Vincent Paronnaud, goes solo here. She gives THE VOICES a bold visual look with lots of bright pinks when Jerry is off his meds, giving much of the film the feeling of a late fifties/early sixties fantasia. When Jerry does take his pills things get decidedly grungier, not to mention the fact that Jerry becomes more aware of his culpability.

THE VOICES is a good looking film with a number of solid performances, with Reynolds in particular standing out both on camera and when providing the voices of Jerry's pets. The film's changes in tone between comedy, tragedy, and horror can be sudden and jarring, but most of the time that works in its favor as these shifts should be shocking. Unfortunately the obvious effort put forth by cast and crew can't fully compensate for the fact that the script, credited to Michael R. Perry, doesn't have much going for it beyond a morbidly amusing premise. The lighthearted musical number over the closing credits is a misstep, too, sending the film out on a note that feels wrongheaded and dilutes the impact of an otherwise appropriately grim conclusion. 2 ½ out of 4 stars.
Posted by Bob Ignizio at 12:00 AM