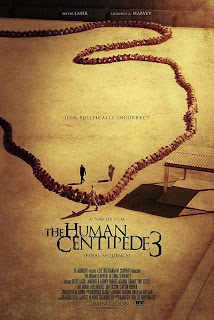 Like it or not, there is now a third (and supposedly final) installment in the HUMAN CENTIPEDE series. The premise of HUMAN CENTIPEDE III (FINAL SEQUENCE) is that a psychotic prison warden (Dieter Laser, star of the original HUMAN CENTIPEDE) is desperate for a new way to punish his inmates. His second in command (Lawrence R. Harvey, star of HC2) suggests taking a cue from the HUMAN CENTIPEDE movies and surgically connecting all the inmates together ass to mouth.

The general tone this time around is less one of horror and more over the top comedy. I suppose one could find some degree of satire directed at the American justice system if one looks for it, but mostly it seems like Six is going for gross-out laughs. He's kind of like a less clever John Waters. Hell, he's not even as clever as Troma's Lloyd Kaufman. Which is not to say that the film doesn't have scenes that will make fans of sick humor chuckle; it does. They just don't have much impact beyond their initial visceral shock.

Of course, for the average movie goer I imagine the humor will be lost and replaced with straight up revulsion. And there's something here to offend just about everyone, with Laser's warden engaging in castration (followed by eating of the testicles), rape, snacking on dried imported clitorises, and just plain torture and murder.

As if having the stars of each preceding film on board in different roles weren't meta enough, writer/director Tom Six also appears as himself, giving advice to the warden. The success of the first two films also seems to have allowed Six to hire some mid-level name actors this time out, with Eric Roberts, Tiny Lister, Robert Lasardo, and Bree Olsen all given supporting roles. Still, it's Laser and Harvey who steal the show, and their utterly committed performances go a long way towards making the film watchable.

I enjoyed the original HUMAN CENTIPEDE and endured the second one. My feelings on this installment fall somewhere between its predecessors. To give credit where it's due, Six once again shows a strong command of visual style, and as unpleasant as much of the onscreen action is, it's undeniably staged and shot well. I can't say I'd want to watch it again, but the movie does have its moments. 2 out of 4 stars.
Posted by Bob Ignizio at 12:00 AM